The Emperor: Nero, Emperor of Rome and feared by his subjects for his temper and cruelty, is in possession of an ancient document predicting that Rome will burn.

The Spy: Sebastos Pantera, assassin and spy for the Roman Legions is ordered to stop the impending cataclysm. He knows that if he doesn't, his life - and that of thousands of others - is in terrible danger.

The Chariot Boy: Math, a young charioteer, subject to the wiles and schemes of the Emperor and the Spy.

Who will win this game, where death stalks the drivers - on the track and off it.


Other Editions - Rome: The Emperor's Spy by Manda Scott 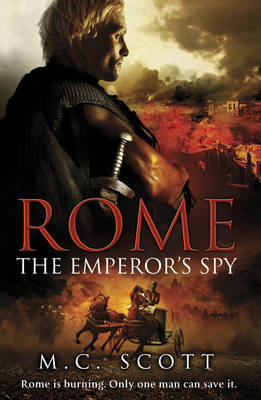 » Have you read this book? We'd like to know what you think about it - write a review about Rome: The Emperor's Spy book by Manda Scott and you'll earn 50c in Boomerang Bucks loyalty dollars (you must be a Boomerang Books Account Holder - it's free to sign up and there are great benefits!)

Manda Scott was a veterinary surgeon and taught at the Universities of Cambridge and Dublin before taking up writing as a full time profession. Now founder and Chair of the Historical Writers' Association, her novels have been shortlisted for the Orange Prize, nominated for an Edgar Award and translated into over twenty languages. In addition to the bestselling Boudica series, she is the author of an acclaimed sequence of Roman novels featuring the Emperor's Spy, Pantera. For more information on her work, please visit: www.mcscott.co.uk