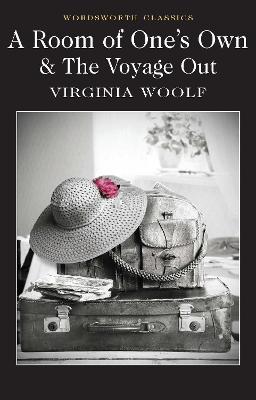 A Room of One's Own & The Voyage Out

'A Room of One's Own' (1929) has become a classic feminist essay and perhaps Virginia Woolf's best known work; 'The Voyage Out' (1915) is highly significant as her first novel. Both focus on the place of women within the power structures of modern society. The essay lays bare the woman artist's struggle for a voice, since throughout history she has been denied the social and economic independence assumed by men. Woolf's prescription is clear: if a woman is to find creative expression equal to a man's, she must have an independent income, and a room of her own. This is both an acute analysis and a spirited rallying cry; it remains surprisingly resonant and relevant in the 21st century. The novel explores these issues more personally, through the character of Rachel Vinrace, a young woman whose "voyage out" to South America opens up powerful encounters with her fellow-travellers, men and women. As she begins to understand her place in the world, she finds the happiness of love, but also sees its brute power. Woolf has a sharp eye for the comedy of English manners in a foreign milieu; but the final undertow of the novel is tragic as, in some of her finest writing, she calls up the essential isolation of the human spirit. AUTHOR: Virginia Woolf has been recognised as one of the greatest novelists of the 20th century and one of the first Modernist writers. Her 'stream-of-consciousness' style, in which the character's thought processes are conveyed, has led to her being considered as one of the greatest innovators in the English language.

Buy A Room of One's Own & The Voyage Out by Virginia Woolf from Australia's Online Independent Bookstore, Boomerang Books.

» Have you read this book? We'd like to know what you think about it - write a review about Room of One's Own & The Voyage Out book by Virginia Woolf and you'll earn 50c in Boomerang Bucks loyalty dollars (you must be a Boomerang Books Account Holder - it's free to sign up and there are great benefits!)


A Preview for this title is currently not available.
More Books By Virginia Woolf
View All