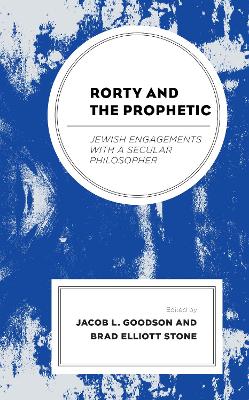 Rorty and the Prophetic: Jewish Engagements with a Secular Philosopher

Description - Rorty and the Prophetic: Jewish Engagements with a Secular Philosopher by Jacob L. Goodson

Rorty and the Prophetic interrogates and provides a constructive assessment to the American neo-pragmatist philosopher Richard Rorty's critiques of Jewish ethics. Rorty dismisses the public applicability of Jewish moral reasoning, because it is based on "the will of God" through divine revelation. As a self-described secular philosopher, it comes as no surprise that Rorty does not find public applicability within a divinely-ordered Jewish ethic. Rorty also rejects the French Jewish philosopher Emmanuel Levinas's ethics, which is based upon the notion of infinite responsibility to the Face of the Other. In Rorty's judgment, Levinas's ethics is "gawky, awkward, and unenlightening." From a Rortyan perspective, it seems that Jewish ethics simply can't win: either it is either too dependent on the will of God or over-emphasizes the human Other. The volume responds to Rorty's criticisms of Jewish ethics in three different ways: first, demonstrating agreements between Rorty and Jewish thinkers; second, offering reflective responses to Rorty's critiques of Judaism on the questions of Messianism, prophecy, and the relationship between politics and theology; third, taking on Rorty's seemingly unfair judgment that Levinas's ethics is "gawky, awkward, and unenlightening." While Rorty does not engage the prophetic tradition of Jewish thought in his essay, "Glorious Hopes, Failed Prophecies," he dismisses the possibility for prophetic reasoning because of its other-worldliness and its emphasis on predicting the future. Rorty fails to attend to and recognize the complexity of prophetic reasoning, and this book presents the complexity of the prophetic within Judaism. Toward these ends and more, Brad Elliott Stone and Jacob L. Goodson offer this book to scholars who contribute to the Jewish academy, those within American Philosophy, and those who think Richard Rorty's voice ought to remain in "conversations" about religion and "conversations" among the religious.

Book Reviews - Rorty and the Prophetic: Jewish Engagements with a Secular Philosopher by Jacob L. Goodson

» Have you read this book? We'd like to know what you think about it - write a review about Rorty and the Prophetic: Jewish Engagements with a Secular Philosopher book by Jacob L. Goodson and you'll earn 50c in Boomerang Bucks loyalty dollars (you must be a Boomerang Books Account Holder - it's free to sign up and there are great benefits!)


A Preview for this title is currently not available.
More Books By Jacob L. Goodson
View All