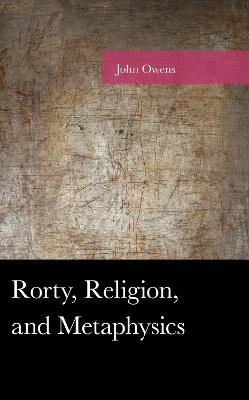 Believing that humanity would be better off if it simply dropped its traditional religious and metaphysical beliefs, Richard Rorty proposes an alternative approach, drawn from the American pragmatist tradition, where things get their significance against a background of broad human interests, and knowledge is regarded as part of the active pursuit of a better world.

Rorty, Religion, and Metaphysics argues that while Rorty's case is clearly and robustly made, it is fundamentally challenged by the phenomenon of human recognition, the relationship that arises between people when they talk to one another. While such recognition seems central to human life, John F. Owens demonstrates that in the end, it cannot be accommodated within Rorty's proposals, given that recognition precisely attributes to others a reality that exceeds the significance they acquire in relation to human interests. It follows that there is more to human interaction than can be explained by Rorty's pragmatism.

Rorty pursues the clash between pragmatism and its traditional religious and metaphysical opposition with great flair, trying to persuade readers simply to walk away from the debate. Owens's analysis notes the striking irony whereby, against his own intentions, Rorty powerfully highlights the continuing interest and significance of the debate.

» Have you read this book? We'd like to know what you think about it - write a review about Rorty, Religion, and Metaphysics book by John Owens and you'll earn 50c in Boomerang Bucks loyalty dollars (you must be a Boomerang Books Account Holder - it's free to sign up and there are great benefits!)


A Preview for this title is currently not available.
More Books By John Owens
View All

Lecture on the Pursuit of Useful Knowledge, Addressed to the Commercial and Labouring Classes.
$39.12 $43.47

Sword and Pen; Or, Ventures and Adventures of Willard Glazier in War and Literature
$85.41 $94.90