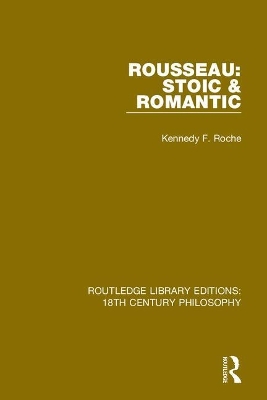 This book, first published in 1974, studies the similarities between Rousseau's thought and that of the Stoics, examining Rousseau's ideas on man, society, the state and government. It makes close reference to Rousseau's writings, and to the works of Seneca and other Stoics, presenting an opportunity to really come to grips with a complex and often contradictory mind. » Have you read this book? We'd like to know what you think about it - write a review about Rousseau: Stoic & Romantic book by Kennedy F. Roche and you'll earn 50c in Boomerang Bucks loyalty dollars (you must be a Boomerang Books Account Holder - it's free to sign up and there are great benefits!)


A Preview for this title is currently not available.
More Books By Kennedy F. Roche
View All