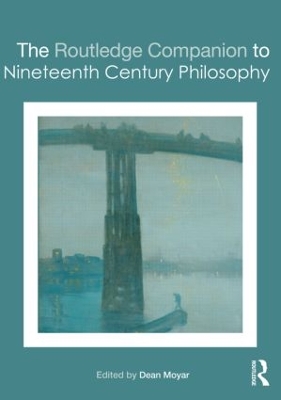 The nineteenth century is a period of stunning philosophical originality, characterised by radical engagement with the emerging human sciences. Often overshadowed by twentieth century philosophy which sought to reject some of its central tenets, the philosophers of the nineteenth century have re-emerged as profoundly important figures.

The Routledge Companion to Nineteenth Century Philosophy is an outstanding survey and assessment of the century as a whole. Divided into seven parts and including thirty chapters written by leading international scholars, the Companion examines and assesses the central topics, themes, and philosophers of the nineteenth century, presenting the first comprehensive picture of the period in a single volume:

The Routledge Companion to Nineteenth Century Philosophy is essential reading for students of philosophy, and for anyone interested in this period in related disciplines such as politics, history, literature and religion. » Have you read this book? We'd like to know what you think about it - write a review about Routledge Companion to Nineteenth Century Philosophy book by Dean Moyar and you'll earn 50c in Boomerang Bucks loyalty dollars (you must be a Boomerang Books Account Holder - it's free to sign up and there are great benefits!)

Dean Moyar is Associate Professor in the Department of Philosophy at Johns Hopkins University. He is the co-editor (with Michael Quante) of Hegel's Phenomenology of Spirit: A Critical Guide (2007), and the author of the Hegel's Conscience (2010).

A Preview for this title is currently not available.
More Books By Dean Moyar
View All