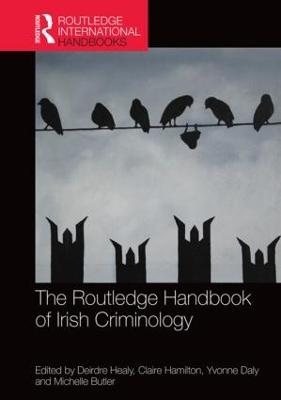 The Routledge Handbook of Irish Criminology

Description - The Routledge Handbook of Irish Criminology by Deirdre Healy

The Routledge Handbook of Irish Criminology is the first edited collection of its kind to bring together the work of leading Irish criminologists in a single volume. While Irish criminology can be characterised as a nascent but dynamic discipline, it has much to offer the Irish and international reader due to the unique historical, cultural, political, social and economic arrangements that exist on the island of Ireland.

The Handbook consists of 30 chapters, which offer original, comprehensive and critical reviews of theory, research, policy and practice in a wide range of subject areas. The chapters are divided into four thematic sections:

Charting the key contours of the criminological enterprise on the island of Ireland and placing the Irish material in the context of the wider European and international literature, this book is essential reading for those involved in the study of Irish criminology and international and comparative criminal justice.

Other Editions - The Routledge Handbook of Irish Criminology by Deirdre Healy » Have you read this book? We'd like to know what you think about it - write a review about Routledge Handbook of Irish Criminology book by Deirdre Healy and you'll earn 50c in Boomerang Bucks loyalty dollars (you must be a Boomerang Books Account Holder - it's free to sign up and there are great benefits!)

Deirdre Healy is a Lecturer at the UCD Sutherland School of Law, University College Dublin. Her teaching and research interests include desistance, reintegration, community sanctions, criminological theory and victimisation. She has a track record of high-quality publications in peer-reviewed international and Irish journals and her work has attracted interest from policymakers and practitioners as well as academics. She has published two books: The Dynamics of Desistance: Charting Pathways through Change (Routledge, 2012) and Rape and Justice in Ireland (with Conor Hanly and Stacey Scriver; Liffey Press, 2009). Claire Hamilton practised as a barrister in criminal law until 2004 when she became a full-time academic. She is currently a Senior Lecturer in Law at Maynooth University, having previously worked as a lecturer in criminology in Dublin Institute of Technology and Queen's University Belfast. Her research interests lie in the area of penology, particularly comparative penology. She has published three books, the most recent being Reconceptualising Penality: A comparative perspective on punitiveness in Ireland, Scotland and New Zealand (Ashgate, 2014). She has written widely on various criminological topics in national and international journals. Yvonne Daly is a Senior Lecturer in Criminal Law and the Law of Evidence in the School of Law and Government at Dublin City University and a member of DCU's Socio-Legal Research Centre. Her research focuses on the pre-trial investigative process, with particular regard to the rights to silence and legal advice, and to the rules on improperly obtained evidence. She has published widely and is co-author of Irish Criminal Justice: Theory, process and procedure (Clarus Press, 2010). She is a Board Member of the Association for Criminal Justice Research and Development (ACJRD) and Vice-Chair of the Royal Irish Academy's Ethical, Political, Legal and Philosophical Studies Committee. Michelle Butler is a Lecturer in Criminology in the School of Sociology, Social Policy and Social Work, Queen's University Belfast. She is a former graduate of University College Dublin and the University of Kent at Canterbury and holds a Doctorate in Criminology from the University of Cambridge. Her research interests include imprisonment, criminological psychology, identity, shame, masculinity and violence. To date she has been involved in a number of research projects in England, the Republic of Ireland and Northern Ireland exploring issues such as imprisonment, identity, violence, young people on remand, fear of crime and vulnerable people in the criminal justice system.

A Preview for this title is currently not available.
More Books By Deirdre Healy
View All