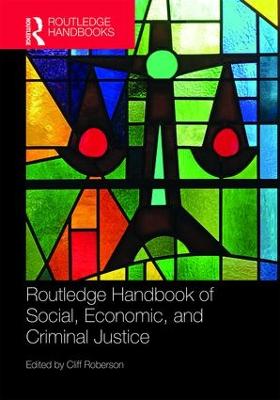 » Have you read this book? We'd like to know what you think about it - write a review about Routledge Handbook of Social, Economic, and Criminal Justice book by Cliff Roberson and you'll earn 50c in Boomerang Bucks loyalty dollars (you must be a Boomerang Books Account Holder - it's free to sign up and there are great benefits!)

Cliff Roberson, LLM, PhD, is Emeritus Professor of Criminal Justice at Washburn University, Topeka, Kansas, and retired Professor of Criminology at California State University, Fresno, California. He has authored or co-authored over 60 books and texts on legal subjects. His previous academic experiences include Associate Vice President for Academic Affairs, Arkansas Tech University; Dean of Arts and Sciences, University of Houston, Victoria; Director of Programs, National College of District Attorneys; Professor of Criminology and Director of Justice Center, California State University, Fresno; and Assistant Professor of Criminal Justice, St. Edwards University. His nonacademic experience includes U.S. Marine Corps service as an infantry officer, trial and defense counsel and military judge as a marine judge advocate, and Director of the Military Law Branch, U.S. Marine Corps. Other legal employment experiences include Trial Supervisor, Office of State Counsel for Offenders, Texas Board of Criminal Justice, and judge pro tem in the California courts. Roberson is admitted to practice before the U.S. Supreme Court, U.S. Court of Military Appeals, U.S. Tax Court, Federal Courts in California and Texas, Supreme Court of Texas, and Supreme Court of California. He holds a PhD in Human Behavior from U.S. International University; an LLM in Criminal Law, Criminology, and Psychiatry from George Washington University; a JD from American University; a BA in Political Science from the University of Missouri; and one year of post-graduate study at the University of Virginia School of Law.

A Preview for this title is currently not available.
More Books By Cliff Roberson
View All

Police Without Borders: The Fading Distinction between Local and Global
$81.89 $90.99