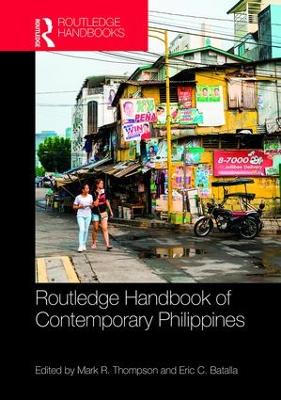 Routledge Handbook of the Contemporary Philippines

The Philippines is a fascinating example of a "poor country democracy" where issues of economic development and poverty, political participation and stability, as well as ethnicity and migration are crucial. The Routledge Handbook of the Contemporary Philippines provides a comprehensive overview of the current political, economic, social, and cultural issues of the country. The Handbook is divided into the following four sections concentrating on a different aspect of the Philippines:

In terms of domestic politics, chapters discuss clientelism, bossism, dynasties, pork barrel and corruption as well as institutions - the presidency, congress, the judiciary, the civil service, political parties, and civilian-military relations. The Philippines is confronted with many overseas challenges, with the foreign relations section focused on the country's relationship with China, Japan, and the USA as well as assessing the impact of the Filipino diaspora community around the world. Regarding economics and social policy, authors examine industrial policy, capital flight, microfinance, technocracy, economic nationalism, poverty, social welfare programs, and livelihoods. The final section on Philippine cultures and movements highlights issues of customs, gender, religion, and nationalism while also examining various social and political forces - the peasantry, the middle class, indigenous peoples, NGOs, the left, trade unionism, the women's movement, and major insurgencies.

Written by leading experts in the field, the Handbook provides students, scholars, and policymakers of Southeast Asia with an interdisciplinary resource on the evolving politics, society, and economics of the Philippines.

» Have you read this book? We'd like to know what you think about it - write a review about Routledge Handbook of the Contemporary Philippines book by Mark R. Thompson and you'll earn 50c in Boomerang Bucks loyalty dollars (you must be a Boomerang Books Account Holder - it's free to sign up and there are great benefits!)

Mark R. Thompson is Professor and Head, Department of Asian and International Studies and Director of the Southeast Asia Research Centre at the City University of Hong Kong. Eric Vincent C. Batalla is Professor and Chair of Political Science at De La Salle University, Philippines.

A Preview for this title is currently not available.
More Books By Mark R. Thompson
View All