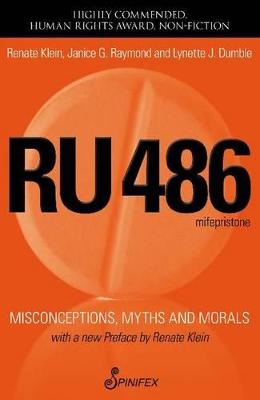 An award-winner when first published, this book has become a classic text for health activists and feminists interested in the complexities of how drugs are developed, marketed and sold to women around the world. In this book the authors review the unusual history of the French abortion pill, RU 486 (mifepristone). They scrutinize the science and politics from inception through to its use on women. Is RU 486 a miracle drug for abortion that is a safe and effective alternative to conventional abortion procedures? Does it privatise and de-medicalise the abortion experience? Is its availability a victory for women? Is RU 486 safe for use in Third World countries and remote rural areas? Who benefits from chemical abortion and how does RU 486 affect existing abortion services? The authors argue that the positive claims made for RU 486 (mifepristone) are filled with myths and misconceptions. RU 486 used on its own is a failed abortifacient and needs the addition of a prostaglandin, a dangerous drug. But the 'success' rates of the drug cocktail RU 486/prostaglandin remain at 92 to 95 per cent compared with 98 to 99 per cent for suction abortions.Suction abortions, which are best done with a local anaesthetic, involve no harmful drugs and are completed in 30 minutes.
By contrast, RU 486/PG abortions last for days, sometimes weeks. Heavy bleeding, transfusions, vomiting, severe pain and infection are among the unpredictable adverse effects. Women have died from sepsis and cardiovascular events. RU 486/PG abortion benefits the medical profession, drug companies and government health economies. Through painstaking research and analysis the authors uncover the truth that chemical abortion is ill-conceived and unethical. They caution that low-tech abortion services are under threat as the mainstream hails RU 486 abortion as 'safe and effective' which it is not.

» Have you read this book? We'd like to know what you think about it - write a review about RU 486 book by Dr. Renate Klein and you'll earn 50c in Boomerang Bucks loyalty dollars (you must be a Boomerang Books Account Holder - it's free to sign up and there are great benefits!)

Renate Klein, PhD, was Associate Professor in Womens Studies at Deakin University, Melbourne, until her retirement in 2006, and is the (co)author/(co)editor of 14 books. She is a biologist and social scientist and taught courses on Reproductive Medicine and Feminist Ethics. Since the 1980s, she has conducted critical feminist research into the new and old reproductive technologies including international population control, IVF (fertility drugs), hormonal and immunological contraceptives, surrogacy, RU 486 and Gardasil. Janice G. Raymond, PhD, is Professor Emerita of Women's Studies and Medical Ethics at the University of Massachusetts in Amherst and was Associate Director of the Institute on Women and Technology at MIT. She was also the Co-Executive Director of the Coalition Against Trafficking in Women (CATW). She has written extensively on new reproductive technologies, prostitution and trafficking. Her latest book is Not a Choice, Not a Job: Exposing the Myths about Prostitution and the Global Sex Trade (Potomac, Virginia, USA/Spinifex Press, Melbourne, 2013). Lynette J. Dumble, PhD, was the Senior Research Fellow in the University of Melbournes Department of Surgery at the Royal Melbourne Hospital and Visiting Professor of Surgery at the University of Texas, Houston, USA. She has published extensively in medical and scientific journals in the areas of transplantation, immunosuppression (including prostaglandins), and Medical Ethics. Since 1997 she has directed the Global Sisterhood Network. Her latest book is The Social & Political Economies of Femicide in Andhra Pradesh (with Rukmini V. Rao, Gramya Resource Centre for Women, Tarnaka, India, 2012).

A Preview for this title is currently not available.
More Books By Dr. Renate Klein
View All