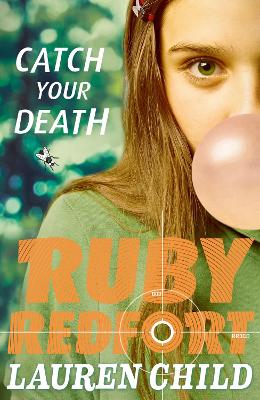 Ruby Redfort: undercover agent, code-cracker and thirteen-year-old genius - there's nothing average about her. Only this time it's an adventure in the wild, and it'll take all Ruby's got just to survive...
The third book in the ice-cool Ruby Redfort series, from former Waterstones Children's Laureate and multi-million-copy bestselling author Lauren Child.

This time, tigers are roaming the streets of Twinford, and it looks like someone has deliberately released some very rare and very dangerous animals. Things are going to get wild - and Ruby is going to get badly lost in the wilderness. The question is: will she ever make it out alive? Well, as always, you wouldn't want to bet against her...

» Have you read this book? We'd like to know what you think about it - write a review about Ruby Redfort: #3 Catch Your Death book by Lauren Child and you'll earn 50c in Boomerang Bucks loyalty dollars (you must be a Boomerang Books Account Holder - it's free to sign up and there are great benefits!)

Lauren Child burst on to the children's books scene in 1999 and has since published many bestselling and award-winning books, including those featuring the hugely popular Charlie and Lola, and the Clarice Bean series. She has won numerous awards including the prestigious Kate Greenaway Medal and the Smarties Gold Award. Her books have been made into an award-winning TV series and have sold in many languages with runaway success.