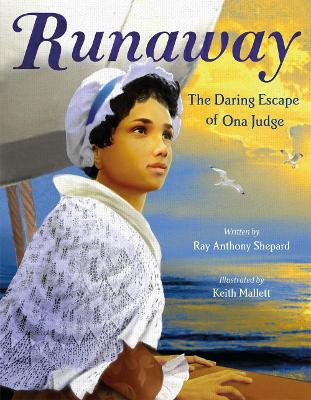 Ona Judge was enslaved by the Washingtons, and served the President's wife, Martha. Ona was widely known for her excellent skills as a seamstress, and was raised alongside Washington's grandchildren. Indeed, she was frequently mistaken for his granddaughter. This biography follows her childhood and adolescence until she decides to run away.

This book doesn't shy away from the horrors of slavery, nor the complex role of house servants. Author Ray Anthony Shepard implicates the reader in Ona's decision to emancipate herself by using a rhetorical refrain, "Why you run, Ona Judge?" This haunting meditation welcomes meaningful and necessary conversation among readers. Illustrator Keith Mallett's rich paintings include fabric collage and add further feeling and majesty to Ona's daring escape.

» Have you read this book? We'd like to know what you think about it - write a review about Runaway: The Daring Escape of Ona Judge book by Ray Anthony Shepard and you'll earn 50c in Boomerang Bucks loyalty dollars (you must be a Boomerang Books Account Holder - it's free to sign up and there are great benefits!)


A Preview for this title is currently not available.
More Books By Ray Anthony Shepard
View All