Description - The Runner by Keith Gray

A breathtaking, prize-winning novel for younger readers by a rising star of children's books.

Jason has had enough of his parents' arguments. He's running away to stay with his brother in Liverpool. On the train journey he meets a 'runner' called Jam, who lives on the monster Intercity trains and stations. His carefree and adventurous life sounds so exciting that Jason begins to think he might join Jam. Then Jason discovers Jam's secret.

Other Editions - The Runner by Keith Gray 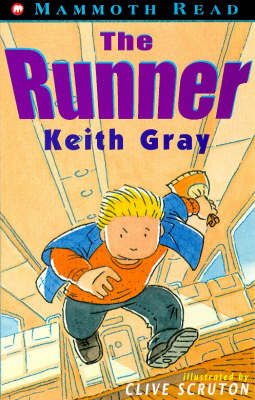 » Have you read this book? We'd like to know what you think about it - write a review about Runner book by Keith Gray and you'll earn 50c in Boomerang Bucks loyalty dollars (you must be a Boomerang Books Account Holder - it's free to sign up and there are great benefits!)

31-year-old Keith was born and brought up in Grimsby and knew from an early age that he wanted to be a writer. When he received 0% for his accountancy exams he decided to pursue his dream. He has since gone on to win the Angus Book Award and the silver medal in the Smarties Prize. He has twice been shortlisted for the Guardian Fiction Prize and was shortlisted for the Booktrust Teen Prize and the Scottish Arts Council Book Award. Rave reviews about his writing have appeared in every broadsheet. Keith was a judge for the Blue Peter Book Award, the Guardian Fiction Prize and the Kathleen Fiedler Award. He has just been asked to judge next year's Booktrust Teen Prize. He was recently interviewed on Radio 4 with Jacqueline Wilson about writing for teens, was featured on Live and Kicking, and his novel The Warehouse has been optioned for television. Keith is now a full-time writer living in Edinburgh.

A Preview for this title is currently not available.
More Books By Keith Gray
View All