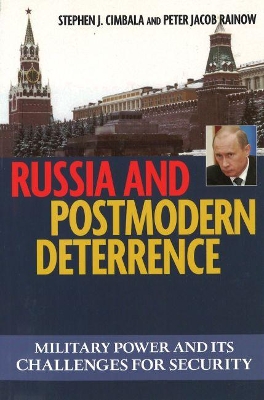 Military Power and its Challenges for Security

Russia is a post-communist country struggling to adapt to the modern world economically and politically. In the twenty-first century, Russia faces postmodern social, cultural, and political problems with its old policy of deterrence. For Russia's political leaders and military planners, three scenarios define their postmodern setting: 1) the world's leading military and economic powers, with the exception of China, are market-based economies and political democracies; 2) the revolution in military affairs, based on advances in information, electronics, and communications, is driving both civil and military technology innovation; and 3) the Cold War's fundamental war-fighting premises, such as deterrence based on nuclear weapons and on conventional armed forces organized and trained for massive wars of attrition, have changed radically.

These points'implications for future Russian strategy are profound, Stephen J. Cimbala and Peter Rainow argue. Russia faces an increased presence of its former adversary, the United States, in adjacent territories; an increasingly assertive NATO, which includes many of Moscow's former allies; and continued fighting in Chechnya. Ominously, China aspires to overtake Russia as the world's second-ranked military power and establish its hegemony over the Pacific basin. In short, Russia confronts a radically new political and military world order that demands adapting to postmodern thinking about deterrence and defense. The danger is that Russia, realizing that it lags behind in leveraging modern technology for military purposes and that it must scrap its dependence on conscription, now relies on nuclear weapons as its first line of deterrence against either nuclear or conventional attack.

Other Editions - Russia and Postmodern Deterrence by Stephen J. Cimbala » Have you read this book? We'd like to know what you think about it - write a review about Russia and Postmodern Deterrence book by Stephen J. Cimbala and you'll earn 50c in Boomerang Bucks loyalty dollars (you must be a Boomerang Books Account Holder - it's free to sign up and there are great benefits!)

Stephen J. Cimbala is an award-winning teacher and Distinguished Professor of Political Science at Penn State University (Delaware County) who has written extensively about national security policy, nuclear arms control, and defense affairs. Cimbala's most recent book is Nuclear Weapons and Strategy. He has served as an adviser or consultant to several U.S. government agencies and think tanks. He lives in Drexel Hill, Pennsylvania. Peter Jacob Rainow is a defense consultant and author or co-author of five books on security issues. In 1991-1992, he participated in the Consensus Project on the future of U.S.-Russian relations at the John M. Olin Institute of Strategic Studies, Harvard University. He was a visiting scholar at Stanford University in 1996-1997. Rainow lives in Foster City, California.