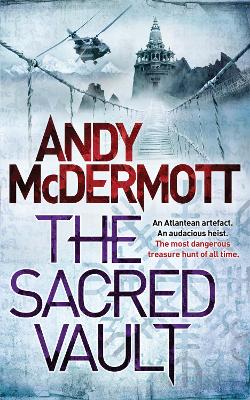 The world is in shock when Michelangelo's David is stolen from a museum in Florence, Italy. The latest in a series of audacious thefts of historical treasures, it's only a matter of time before another priceless artefact is targeted.When the Talonor Codex a great Atlantean explorer's account of his travels is stolen, it becomes clear that the thefts form only part of the raiders' ultimate plan. The codex holds clues to the location of the Vault of Shiva and its fabled contents the legendary Shiva-Vedas, the chronicles of the ancient Hindu god of destruction.Witnesses to the latest daring robbery, archaeologist Nina Wilde and former SAS soldier Eddie Chase are forced into a treacherous hunt across the world to discover the vault before its secrets fall into dangerous hands. The vault's prize is a treasure beyond price, but it may also be the catalyst for global annihilation...

» Have you read this book? We'd like to know what you think about it - write a review about Sacred Vault (Wilde/Chase 6) book by Andy McDermott and you'll earn 50c in Boomerang Bucks loyalty dollars (you must be a Boomerang Books Account Holder - it's free to sign up and there are great benefits!)