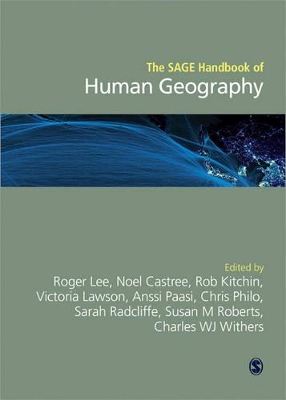 "Superb! How refreshing to see a Handbook that eschews convention and explores the richness and diversity of the geographical imagination in such stimulating and challenging ways."
- Peter Dicken, University of Manchester

"Stands out as an innovative and exciting contribution that exceeds the genre."
- Sallie A. Marston, University of Arizona

"Captures wonderfully the richness and complexity of the worlds that human beings inhabit... This is a stand-out among handbooks!"
- Lily Kong, National University of Singapore

"This wonderfully unconventional book demonstrates human geography's character and significance not by marching through traditional themes, but by presenting a set of geographical essays on basic ideas, practices, and concerns."
- Alexander B. Murphy, University of Oregon "This SAGE Handbook stands out for its capacity to provoke the reader to think anew about human geography ... essays that offer some profoundly original insights into what it means to engage geographically with the world."
- Eric Sheppard, UCLA

Published in association with the journal Progress in Human Geography, edited and written by the principal scholars in the discipline, this Handbook demonstrates the difference that thinking about the world geographically makes.

Each section considers how human geography shapes the world, interrogates it, and intervenes in it. It includes a major retrospective and prospective introductory essay, with three substantive sections on:
The Handbook also has an innovative multimedia component of conversations about key issues in human geography - as well as an overview of human geography from the Editors.

A key reference for any scholar interested in questions about what difference it makes to think spatially or geographically about the world, this Handbook is a rich and textured statement about the geographical imagination.

» Have you read this book? We'd like to know what you think about it - write a review about SAGE Handbook of Human Geography, 2v book by Roger Lee and you'll earn 50c in Boomerang Bucks loyalty dollars (you must be a Boomerang Books Account Holder - it's free to sign up and there are great benefits!)

Roger Lee is Emeritus Professor of Geography at Queen Mary, University of London. He is an economic geographer interested in the connections and contradictions between the presumed hard logics of economy and their socio-cultural practice and in the possibilities for progressive change that might ensue from the latter. Noel Castree is a Professor of Geography at the University of Wollongong, Australia. He previously worked at the University of Liverpool (1995-1999) and the University of Manchester (2000-2015). He has long-standing interests in understanding people-environment relationships and has used Marxist theory to explore how capitalism affects the non-human world. His current research examines the ways research into global environmental change is shaping policy and public debate about the Earth's future. Noel Castree has published widely within and beyond Geography in journal ranging from Antipode and Transactions of the Institute of British Geographers to Environmental Humanities and Nature Climate Change. He has written or edited eight books and 3 reference works. He is the managing editor of Progress in Human Geography. Rob Kitchin is a professor and ERC Advanced Investigator in the National Institute of Regional and Spatial Analysis at the National University of Ireland Maynooth, for which he was director between 2002 and 2013. He has published widely across the social sciences, including 23 books and 140 articles and book chapters. He is editor of the international journals, Progress in Human Geography and Dialogues in Human Geography, and for eleven years was the editor of Social and Cultural Geography. He was the editor-in-chief of the 12 volume, International Encyclopedia of Human Geography, and edits two book series, Irish Society and Key Concepts in Geography. He is currently a PI on the Programmable City project, the Digital Repository of Ireland, and the All-Island Research Observatory. He has delivered over 100 invited talks at conferences and universities and his research has been cited over 600 times in local, national and international media. His book 'Code/Space' (with Martin Dodge) won the Association of American Geographers 'Meridian Book Award' for the outstanding book in the discipline in 2011 and a 'CHOICE Outstanding Academic Title 2011' award from the American Library Association. He was the 2013 recipient of the Royal Irish Academy's Gold Medal for the Social Sciences. Victoria Lawson is Professor of Geography and former chair at the University of Washington Geography Department. Her work engages with feminist care ethics, relational poverty studies and comparative qualitative methodologies. She served as North American Editor for PiHG (2008-2012) and is editorial board member of Economic Geography. Anssi Paasi is Professor of Geography at the University of Oulu, Finland. He has published widely on the socio-cultural construction of political borders, spatial identities, new regional geography, and on region/territory building processes. His books include Territories, Boundaries and Consciousness (Wiley 1996) Chris Philo was a Lecturer at the University of Wales, Lampeter, before becoming, in 1995, Professor of Geography at the University of Glasgow. He specialises in the history and theory of geographical thought, as well as the historical and social geographies of 'madness', 'outsiders' of all kinds and human-animal relations. Sarah A Radcliffe is Professor of Latin American Geography, at the University of Cambridge. She has interests in development geography, gender and geography, and postcolonial approaches. She has published widely on these themes in English and Spanish, including Indigenous Development in the Andes: Culture, Power and Transnationalism (2009, Duke University Press, co-author). Professor Radcliffe's latest book is Dilemmas of Difference: Indigenous women and the limits of postcolonial development policy (2015, Duke University Press). Susan M. Roberts is Professor of Geography and member of the Committee on Social Theory at the University of Kentucky. Her interests include political and economic geography, and the political economy of inequality and development. Professor Charles W J Withers is Ogilvie Chair of Geography and Professor of Historical Geography at the University of Edinburgh. He has been a professor in Edinburgh since 1994. He is a fellow of the British Academy, of the Royal Society of Edinburgh, the Royal Scottish Geographical Society, and the Royal Historical Society. In 2008, he was awarded the Centenary Medal of the Royal Scottish Geographical Society in recognition of his 'outstanding and sustained contribution to historical geography, the history of cartography and to the history of geographical knowledge'. In 2012, he was awarded the Founders' Gold Medal of the Royal Geographical Society. This, one of the Society's two Royal Gold Medals, was given in respect of his 'world-leading encouragement and development of historical and cultural geography'. Professor Withers' research and teaching interests centre on the historical geography of science and the Enlightenment, the historical geographies of print and exploration, and the history of cartography. He is the author or co-author of ten research monographs, and a further nine co-edited volumes, in addition to numerous scholarly articles and essays. His co-authored Scotland: Mapping the Nation (written with Chris Fleet and Margaret Wilkes), which was published in 2011 by Birlinn Press in association with the National Library of Scotland, was the Scottish Research Book of the Year in the Saltire Society Literary Awards for 2012. His most recent book, co-authored with Innes Keighren and Bill Bell, is Travels into Print: Exploration, Writing, and Publishing with John Murray, 1773-1859'. This was published by the University of Chicago Press in May 2015. In 2015, he was appointed by Her Majesty Queen Elizabeth II and First Minister Nicola Sturgeon to the position of Geographer Royal for Scotland, the first person to hold this title as a personal honorific for 118 years. He is currently writing a historical geography of the Prime Meridian, a narrative for which we know the solution ('Greenwich, from 1884') but not the problem.

A Preview for this title is currently not available.
More Books By Roger Lee
View All

Parkinson's Disease: An Insider's Perspective to Reduce the Symptoms Through Music Therapy
$30.83 $34.26