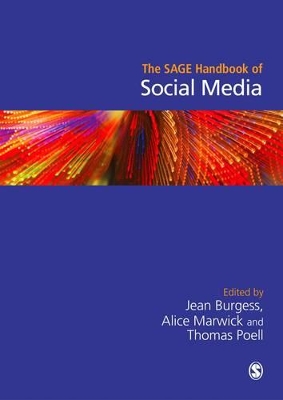 The SAGE Handbook of Social Media

Description - The SAGE Handbook of Social Media by Jean Burgess

The world is in the midst of a social media paradigm. Once viewed as trivial and peripheral, social media platforms like Twitter, Facebook and WeChat have become an important part of the information and communication infrastructure of society. They are bound up with business and politics as well as everyday life, work, and personal relationships.

This international Handbook addresses the most significant research themes, methodological approaches and debates in the study of social media. It contains substantial chapters written especially for this book by leading scholars from a range of disciplinary perspectives, covering everything from computational social science to sexual self-expression.


Other Editions - The SAGE Handbook of Social Media by Jean Burgess 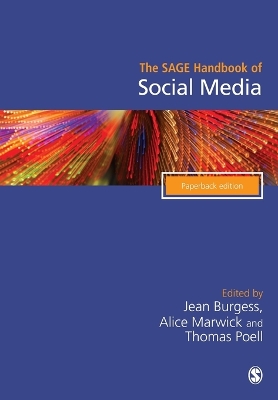 » Have you read this book? We'd like to know what you think about it - write a review about SAGE Handbook of Social Media book by Jean Burgess and you'll earn 50c in Boomerang Bucks loyalty dollars (you must be a Boomerang Books Account Holder - it's free to sign up and there are great benefits!)

Jean Burgess is Professor of Digital Media and Director of the QUT Digital Media Research Centre (DMRC), Queensland University of Technology, Australia. She is author or editor of more than 100 publications on digital and social media, including YouTube: Online Video and Participatory Culture (Polity Press), Twitter and Society (Peter Lang), Studying Mobile Media (Routledge) and The Handbook of New Media Dynamics (Wiley-Blackwell) Alice Marwick (PhD, New York University) is a Fellow at the Data & Society Research Institute, where she leads the Media Manipulation project, and an Assistant Professor of Communication at the University of North Carolina at Chapel Hill. Her current book project examines how the networked nature of online privacy disproportionately impacts marginalized individuals in terms of gender, race, and socio-economic status. She is the author of Status Update: Celebrity, Publicity and Branding in the Social Media Age (Yale 2013), an ethnographic study of the San Francisco tech scene which examines how people seek social status through attention and visibility online. Marwick was previously Assistant Professor of Communication and Media Studies and the Director of the McGannon Center for Communication Research at Fordham University. She has written for popular publications such as The New York Times, The New York Review of Books and The Guardian in addition to academic publications such as Public Culture and New Media and Society. Thomas Poell is Assistant Professor of New Media & Digital Culture and Program Director of the Research Master Media Studies at the University of Amsterdam. He has published widely on social media and popular protest, as well as on the role of these media in the development of new forms of journalism. His next book, co-authored with Jose van Dijck and Martijn de Waal, will be titled The Platform Society. Public values in a connective world.

A Preview for this title is currently not available.
More Books By Jean Burgess
View All

Collaborative Stage Directing: A Guide to Creating and Managing a Positive Theatre Environment
$249.48 $252.00