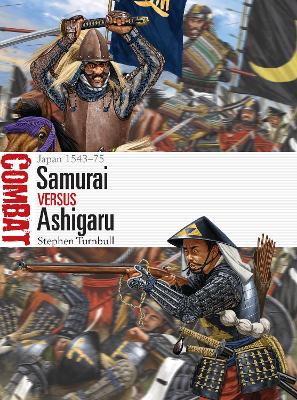 During the 16th century, Japan underwent a military revolution, characterized by the deployment of large armies, the introduction of firearms and an eventual shift towards fighting on foot. This study encapsulates these great changes through an exploration of the experience on the ground at three key battles, Uedahara (1548), Mikata ga Hara (1573) and Nagashino (1575), in which two very different types of warrior were pitted against each other. On one side were samurai, the elite aristocratic knights whose status was proclaimed by the possession and use of a horse. On the other side were the foot soldiers known as ashigaru, lower-class warriors who were initially attendants to the samurai but who joined the armies in increasing numbers, attracted by loot and glory. These two types of warrior battled for dominance across the period, changing and adapting their tactics as time went on.

In this title, the development of the conflicts between samurai and ashigaru is explored across three key battles, where highly trained elite mounted samurai of the Takeda clan faced ashigaru at very different stages in their development. The profound and irreversible changes that took place as the conflicts progressed are analysed in detail, culminating in the eventual incorporation of the ashigaru as the lowest ranks of the samurai class in within the standing army of Tokugawa Japan.

» Have you read this book? We'd like to know what you think about it - write a review about Samurai vs Ashigaru: Japan 1543-75 book by Stephen Turnbull and you'll earn 50c in Boomerang Bucks loyalty dollars (you must be a Boomerang Books Account Holder - it's free to sign up and there are great benefits!)


A Preview for this title is currently not available.
More Books By Stephen Turnbull
View All