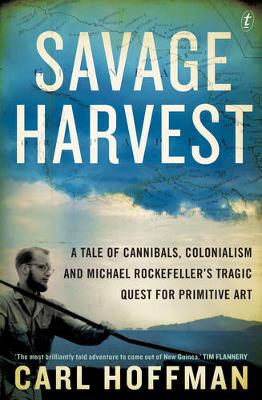 The mysterious disappearance of Michael Rockefeller in New Guinea in 1961 has kept the world and his powerful, influential family guessing for years. Now, Carl Hoffman uncovers startling new evidence that finally tells the full, astonishing story.

Despite exhaustive searches, no trace of Rockefeller was ever found. Soon after his disappearance, rumours surfaced that he'd been killed and ceremonially eaten by the local Asmat-a native tribe of warriors whose complex culture was built around sacred, reciprocal violence, head hunting and ritual cannibalism. The Dutch government and the Rockefeller family denied the story, and Michael's death was officially ruled a drowning. Yet doubts lingered. Sensational rumours and stories circulated, fuelling speculation and intrigue for decades. The real story has long waited to be told-until now.

» Have you read this book? We'd like to know what you think about it - write a review about Savage Harvest: A Tale of Cannibals, Colonialism and Michael Rockefeller's Tragic Quest for Primitive Art book by Carl Hoffman and you'll earn 50c in Boomerang Bucks loyalty dollars (you must be a Boomerang Books Account Holder - it's free to sign up and there are great benefits!)

Carl Hoffman is a contributing editor at National Geographic Traveler. Savage Harvest is his third book. His second, The Lunatic Express: Discovering the World Via Its Most Dangerous Buses, Boats, Trains and Planes, was named one of the ten best books of 2010 by the Wall Street Journal and was a New York Times summer reading pick. He has won four Lowell Thomas Awards from the Society of American Travel Writers Foundation and one North American Travel Journalism Award. A veteran journalist and former contributing editor for Wired, he has travelled to more than 70 countries on assignment for Outside, Smithsonian, National Geographic Adventure, ESPN, the Magazine, Wired, Men's Journal, Popular Mechanics and many other publications. He is a native of Washington, D.C. and the father of three children.

A Preview for this title is currently not available.
More Books By Carl Hoffman
View All

Liar's Circus: A Strange and Terrifying Journey Into the Upside-Down World of Trump's MAGA Rallies
$59.49 $66.10