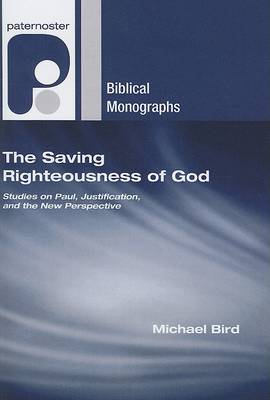 The Saving Righteousness of God

Studies on Paul, Justification and the New Perspective

Description - The Saving Righteousness of God by MR Michael Bird

This book presents a series of studies on contentious aspects of Paul's doctrine of justification including the meaning of ""righteousness,"" the question of imputation, the role of resurrection in justification, an evaluation of the New Perspective, the soteriological and ecclesiological significance of justification, justification by faith with judgment according to works, and debates over the orthodoxy of N. T. Wright. The burden of this volume is to demonstrate that reformed and ""new"" readings of Paul are indispensable to attaining a full understanding of Paul's soteriology. An analysis of Galatians and Romans demonstrates that the covenantal and forensic dimensions of justification go hand in glove. The vertical and horizontal aspects need to be appropriately described and weighted in order to provide a holistic rendering of justification in Paul's letters. According to Paul, faith alone in Jesus Christ is the instrument of eschatological vindication; and faith alone marks out the true people of God. ""In a debate where the worst of Protestant infighting has been revived, and the 'spirit of slavery' has been more influential than 'the Spirit of adoption, ' Michael Bird's treatment is more than welcome. His is a calm, judicious and irenic voice amid the welter of paranoid accusation and counteraccusation, which ought to be heard widely, and--more important--ought to be heeded. Perhaps, then the world will be able to say again, 'See how these Christians love one another'--without sneering."" --James D. G. Dunn, Emeritus Lightfoot Professor of Divinity, University of Durham ""For fair treatment and thoroughness of coverage, including that of literature which usually flies under most scholars' radar, this book is probably unmatched."" --Robert H. Gundry, Scholar-in-Residence and Professor Emeritus, Westmont College ""The so-called 'new perspective' continues to exercise a profound effect on studies both of Judaism and of Paul. Students may well be confused by the complexities of the debate, but Michael Bird helpfully shows how fruitful insights can be derived from scholars on both sides of it. This fresh and sane approach to a difficult area will clarify the essential issues for students and preachers alike as they wrestle with expounding the thought of Paul for the contemporary church."" --I. Howard Marshall, Honorary Research Professor of New Testament, University of Aberdeen ""The study of what Paul means by 'justification' has hopped its rails, and now scholars from opposing perspectives--traditional Reformation theology and the New Perspective--have exited the train and are standing on opposite sides of the track tossing stones at one another. Michael Bird has called for a peace plan, and his proposal of an incorporated righteousness not only offers peace but can actually get the train back on its tracks so we can get on with moving the gospel into our world. This study deserves a 'Nobel peace prize in Theology'."" --Scot McKnight, Karl A. Olsson Professor in Religious Studies, North Park University Michael F. Bird (Ph.D., University of Queensland, Australia) is New Testament Lecturer at Highland Theological College in Dingwall, Scotland.

» Have you read this book? We'd like to know what you think about it - write a review about Saving Righteousness of God book by MR Michael Bird and you'll earn 50c in Boomerang Bucks loyalty dollars (you must be a Boomerang Books Account Holder - it's free to sign up and there are great benefits!)


A Preview for this title is currently not available.
More Books By MR Michael Bird
View All