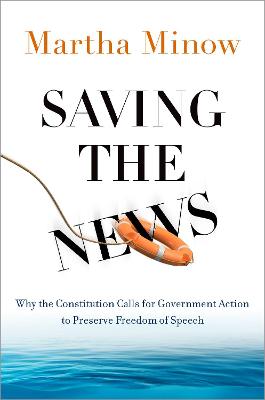 Saving the News: Why the Constitution Calls for Government Action to Preserve Freedom of Speech

Description - Saving the News: Why the Constitution Calls for Government Action to Preserve Freedom of Speech by Martha Minow

A detailed argument of how our government has interfered in the direction of America's media landscape that traces major transformations in media since the printing press and charts a path for reform. In Saving the News, Martha Minow takes stock of the new media landscape. She focuses on the extent to which our constitutional system is to blame for the current parlous state of affairs and on our government's
responsibilities for alleviating the problem. As Minow shows, the First Amendment of the US Constitution assumes the existence and durability of a private industry. Although the First Amendment does not govern the conduct of entirely
private enterprises, nothing in the Constitution forecloses government action to regulate concentrated economic power, to require disclosure of who is financing communications, or to support news initiatives where there are market failures. Moreover, the federal government has contributed financial resources, laws, and regulations to develop and shape media in the United States. Thus, Minow argues that the transformation of media from printing presses to the internet was shaped by deliberate
government policies that influenced the direction of private enterprise. In short, the government has crafted the direction and contours of America's media ecosystem.Building upon
this basic argument, Minow outlines an array of reforms, including a new fairness doctrine, regulating digital platforms as public utilities, using antitrust authority to regulate the media, policing fraud, and more robust funding of public media. As she stresses, such reforms are not merely plausible ideas; they are the kinds of initiatives needed if the First Amendment guarantee of freedom of the press continues to hold meaning in the twenty-first century.

Buy Saving the News: Why the Constitution Calls for Government Action to Preserve Freedom of Speech by Martha Minow from Australia's Online Independent Bookstore, Boomerang Books.

Book Reviews - Saving the News: Why the Constitution Calls for Government Action to Preserve Freedom of Speech by Martha Minow

» Have you read this book? We'd like to know what you think about it - write a review about Saving the News: Why the Constitution Calls for Government Action to Preserve Freedom of Speech book by Martha Minow and you'll earn 50c in Boomerang Bucks loyalty dollars (you must be a Boomerang Books Account Holder - it's free to sign up and there are great benefits!)


A Preview for this title is currently not available.
More Books By Martha Minow
View All