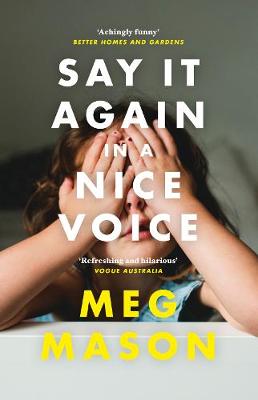 Say It Again in a Nice Voice

Description - Say It Again in a Nice Voice by Meg Mason

From the author of the much-acclaimed novels Sorrow and Bliss and You Be Mother, Meg Mason, comes a hilarious and endearing memoir about first-time parenting.

'It's a fair bet to suggest that Say It Again in a Nice Voice will resonate with a lot of mothers.' Sydney Morning Herald

'Mothers. those women with purses the size of meat trays that hold an entire deck of school portrait photos and a chequebook, make a casserole without a recipe, make the tightest bed you'll ever sleep in and only swear under extreme duress. How, how, would I go from me to that?'

At 24, Meg Mason was newly married to a man 'essentially indistinguishable from a young Matt Damon' after landing her dream job, writing for The Times in London. What could possibly go wrong? A holiday in Greece, an accidental shortage of birth control, and eight months later she was sobbing on the side of a road over trading her career for something she knew zip about.

On October 8, 2003, she invented motherhood by Having A Baby. On October 9, she discovered a bunch of women had done that already. But still they couldn't tell her how to do it. Thanks to a helpful neighbour, she knew that convincing a newborn to take a bottle by letting it lick a Dorito first to 'get more thirsty' didn't always work, but not what to do when your child won't sleep for roughly two years in London or in Sydney, or how to remove your hand from a stroller - after you've superglued it to the handle.

Hair-raising, terrifying and hilariously funny, along the way she discovers that being a mother, however disaster-prone, just might be the only thing that she is truly irreplaceable at.

'Meg Mason has a way of making the most mundane baby drama hilarious. Say It Again In A Nice Voice had me laughing out loud ... Hands down it would be hard to admit to as many 'new mother mistakes' as delightful, self-deprecating Meg.' ABC Radio 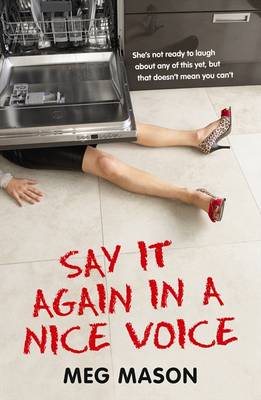 » Have you read this book? We'd like to know what you think about it - write a review about Say It Again in a Nice Voice book by Meg Mason and you'll earn 50c in Boomerang Bucks loyalty dollars (you must be a Boomerang Books Account Holder - it's free to sign up and there are great benefits!)


A Preview for this title is currently not available.
More Books By Meg Mason
View All