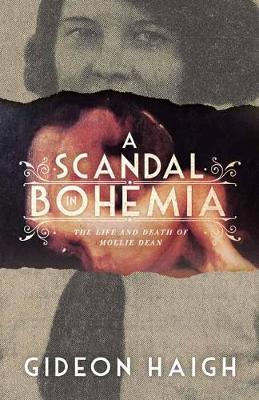 A Scandal in Bohemia

Description - A Scandal in Bohemia by Gideon Haigh

An unsolved murder takes one of Australia's foremost writers of non-fiction into the 1930s Bohemian demi-monde, exploring the fate of a talented young woman trying to make her way in that artistic, sexualised, 'liberated' world.

As enigmatic in life as in death, Mollie Dean was a woman determined to transcend. Creatively ambitious and sexually precocious, at twenty-five she was a poet, aspiring novelist and muse on the peripheries of Melbourne's bohemian salons - until one night in 1930 she was brutally slain by an unknown killer in a laneway while walking home.

Her family was implicated. Those in her circle, including her acclaimed artist lover Colin Colahan, were shamed. Her memory was anxiously suppressed. Yet the mystery of her death rendered more mysterious her life and Mollie's story lingered, incorporated into memoir, literature, television, theatre and song, most notably in George Johnston's classic My Brother Jack.

In A Scandal in Bohemia, Gideon Haigh explodes the true crime genre with a murder story about life as well as death. Armed with only a single photograph and echoes of Mollie's voice, he has reassembled the precarious life of a talented woman without a room of her own - a true outsider, excluded by the very world that celebrated her in its art. In this work of restorative justice, Mollie Dean emerges as a tenacious, charismatic, independent woman for whom society had no place, and whom everybody tried to forget - but nobody could.

'Haigh's narrative takes shape through powerful "layers of association" ... as much a portrait of Mollie's life and death as it is a portrayal of the city and the society in which she lived.' Australian Book Review

'In this latest addition to his true crime oeuvre, Melbourne journalist and polymath Gideon Haigh attempts to uncover Dean's life as well as her death... the book is a fascinating exploration.' The Saturday Paper

Book Reviews - A Scandal in Bohemia by Gideon Haigh

» Have you read this book? We'd like to know what you think about it - write a review about Scandal in Bohemia book by Gideon Haigh and you'll earn 50c in Boomerang Bucks loyalty dollars (you must be a Boomerang Books Account Holder - it's free to sign up and there are great benefits!)

Gideon Haigh has been a journalist for more than three decades, has contributed to more than a hundred newspapers and magazines, published thirty-five books and edited seven others. The Office- A Hardworking History won the NSW Premier's Literary Award for Non-Fiction; On Warne was shortlisted for the Melbourne Prize for Literature; Certain Admissions won the 2016 Ned Kelly Award for True Crime; and Stroke of Genius- Victor Trumper and the Shot that Changed Cricket was shortlisted for the NSW Premier's Literary Award for Nonfiction. Gideon lives in Melbourne with his wife and daughter. Nobody has played more games for his cricket club - nor, perhaps, wanted to.