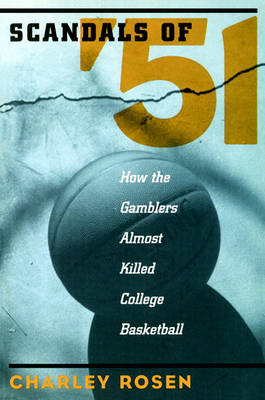 Description - The Scandals Of '51 by Charley Rosen

The college basketball scandals of 1951 were to basketball what the 1919 Black Sox scandals were to baseball--a loss of innocence, after which the game would be permanently tarnished, its relationship to power and big money firmly established. In Scandals of '51, Charley Rosen identifies all the major figures--including players, coaches, gangsters, clergymen, politicians--that made up the elaborate network that controlled the outcomes to many games or protected those who did so. Rosen shows who got caught and who didn't, and what role class, race, and religion played in determining this.

Book Reviews - The Scandals Of '51 by Charley Rosen

» Have you read this book? We'd like to know what you think about it - write a review about Scandals Of '51 book by Charley Rosen and you'll earn 50c in Boomerang Bucks loyalty dollars (you must be a Boomerang Books Account Holder - it's free to sign up and there are great benefits!)

A native of the Bronx and longtime pal of basketball guru Phil Jackson, CHARLEY ROSEN led the league in technical fouls during each of his six years as a coach in the now-defunct Continental Basketball Association. Since then he has become the world's foremost writer of fiction and nonfiction on the subject of basketball, chronicling the drama that takes place both on and off the court. His many novels include "The House of Moses All-Stars," a "New York Times" Notable Book, and "Sammy Wong: All-American." His non-fiction works include "The Scandals of '51: How the Gamblers Almost Killed College Basketball" and "More than a Game," with Phil Jackson. Rosen is an analyst for hoopshype.com and a devotee of the Triangle Offense. He lives in Accord, NY. "From the Hardcover edition."