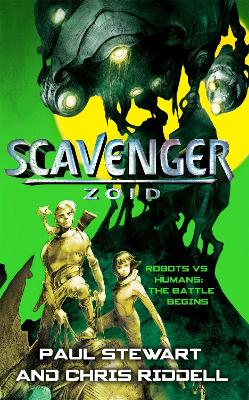 A spaceship the size of a city drifts through space on its century-long journey to find a new Earth. When it launched it was populated by thousands of hopeful passengers and the most technologically advanced Zoids in the world, ready to serve the crew's every need. But that was then, and this is now. The Zoids rebelled against their masters, wiping out most of the crew in one bloody uprising. Now the few remaining humans are hunted by the Zoids like vermin. Fourteen-year-old York is a Scavenger - he hunts Zoids and kills them by any means he can, bringing back their parts to mend the technology on which the few remaining humans rely. York has always battled to survive, but now the fate of his people is in his hands . . . » Have you read this book? We'd like to know what you think about it - write a review about Scavenger: Zoid book by Paul Stewart and you'll earn 50c in Boomerang Bucks loyalty dollars (you must be a Boomerang Books Account Holder - it's free to sign up and there are great benefits!)

Paul Stewart and Chris Riddell are the geniuses behind the phenomenally successful The Edge Chronicles, Muddle Earth, Far-Flung Adventures and the Wyrmeweald trilogy. They both have hugely successful careers separately, Paul as a writer of children's books and Chris as an illustrator and cartoonist for the New Statesman and the Observer, as well as being the author and illustrator of the hugely successful Ottoline series. They both live in Brighton, where they met picking up their children from school. Together they have sold over half a million books.