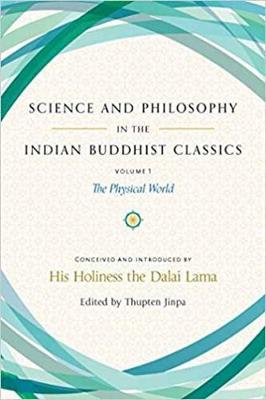 Science and Philosophy in the Indian Buddhist Classics

The Science of the Material World

His Holiness the Dalai Lama

Buy Science and Philosophy in the Indian Buddhist Classics by His Holiness the Dalai Lama from Australia's Online Independent Bookstore, Boomerang Books.

» Have you read this book? We'd like to know what you think about it - write a review about Science and Philosophy in the Indian Buddhist Classics book by His Holiness the Dalai Lama and you'll earn 50c in Boomerang Bucks loyalty dollars (you must be a Boomerang Books Account Holder - it's free to sign up and there are great benefits!)

His Holiness the Dalai Lama is the spiritual leader of the Tibetan people, a Nobel Peace Prize recipient, and a beacon of inspiration for Buddhists and non-Buddhists alike. He is admired also for his more than four decades of systematic dialogues with scientists exploring ways to developing new evidence-based approaches to alleviation of suffering and promoting human flourishing. He is the co-founder of the Mind and Life Institute and has helped to revolutionize traditional Tibetan monastic curriculum by incorporating the teaching of modern science. He is a great champion of the great Indian Nalanda tradition of science, philosophy, and wisdom practices. Thupten Jinpa is a well-known Buddhist scholar and has been the principal English-language translator for His Holiness the Dalai Lama for more than three decades. A former monk and a Geshe Lharampa, he also holds a BA in philosophy and a PhD in religious studies, both from Cambridge University. His is the author and translator of many books and teaches at McGill University in Montreal.

A Preview for this title is currently not available.
More Books By His Holiness the Dalai Lama
View All