First published in 1927, Science and Philosophy: And Other Essays is a collection of individual papers written by Bernard Bosanquet during his highly industrious philosophical life. The collection was put together by Bosanquet's wife after the death of the writer and remains mostly unaltered with just a few papers added and the order of entries improved. The papers here displayed consist of various contributions Bosanquet made to Mind, the Proceedings of the Aristotelian Society, the International Journal of Ethics and other periodicals, as well as work from volumes of lectures and essays under his own or other editorship.

Throughout the collection, Bosanquet considers the relationship between science and philosophy. The two subject areas became increasingly intertwined during Bosanquet's lifetime as scientific writers grew more interested in the philosophical investigation of the concepts which underlined their work and philosophical thinkers recognised the importance of the relationship between mathematics and logic as well as that between physics and metaphysics. The first essay in this volume discusses this idea explicitly and all subsequent articles may be regarded as essays in support of the main discussion with which the volume opens.

Other Editions - Science and Philosophy by Bernard Bosanquet 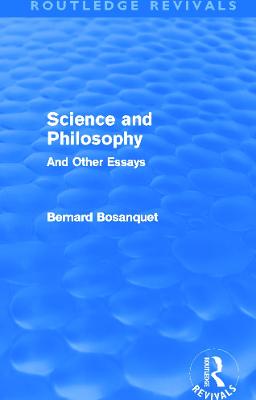 » Have you read this book? We'd like to know what you think about it - write a review about Science and Philosophy book by Bernard Bosanquet and you'll earn 50c in Boomerang Bucks loyalty dollars (you must be a Boomerang Books Account Holder - it's free to sign up and there are great benefits!)


A Preview for this title is currently not available.
More Books By Bernard Bosanquet
View All

The Value and Destiny of the Individual: The Gifford Lectures for 1912 Delivered in Edinburgh University
$93.01 $103.34