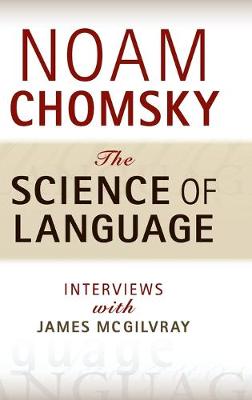 The Science of Language

Description - The Science of Language by Noam Chomsky

Noam Chomsky is one of the most influential thinkers of our time, yet his views are often misunderstood. In this previously unpublished series of interviews, Chomsky discusses his iconoclastic and important ideas concerning language, human nature and politics. In dialogue with James McGilvray, Professor of Philosophy at McGill University, Chomsky takes up a wide variety of topics - the nature of language, the philosophies of language and mind, morality and universality, science and common sense, and the evolution of language. McGilvray's extensive commentary helps make this incisive set of interviews accessible to a variety of readers. The volume is essential reading for those involved in the study of language and mind, as well as anyone with an interest in Chomsky's ideas.

Other Editions - The Science of Language by Noam Chomsky Book Reviews - The Science of Language by Noam Chomsky

» Have you read this book? We'd like to know what you think about it - write a review about Science of Language book by Noam Chomsky and you'll earn 50c in Boomerang Bucks loyalty dollars (you must be a Boomerang Books Account Holder - it's free to sign up and there are great benefits!)

Noam Chomsky is Institute Professor (retired) in the Department of Linguistics and Philosophy at the Massachusetts Institute of Technology. James McGilvray is Professor of Philosophy at McGill University, Montreal. He has written a general introduction to Chomsky's work (Chomsky, 1999) and edited and contributed to The Cambridge Companion to Chomsky (2005) and the second (2002) and third (2009) editions of Chomsky's seminal Cartesian Linguistics (Cambridge University Press). He has also published several articles on the philosophies of language and mind that defend in various ways the methods for the study of language and mind developed and endorsed by Chomsky and other internalist 'biolinguists'.

Climate Crisis and the Global Green New Deal: The Political Economy of Saving the Planet
$25.19 $29.99

The Precipice: Neoliberalism, the Pandemic and the Urgent Need for Radical Change
$10.91 $12.99