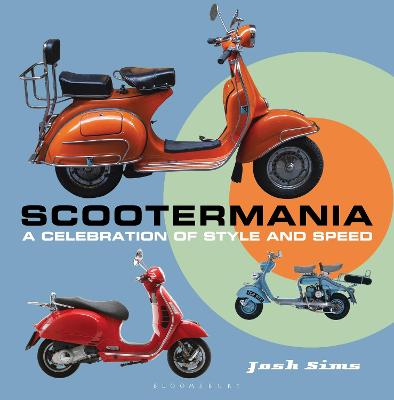 Scootermania: A celebration of style and speed

Description - Scootermania: A celebration of style and speed by Josh Sims

From its origins the Italian battlefields of the Second World War, to movie roles as Audrey Hepburn's transport in Roman Holiday and Sting's stylish companion in Quadrophenia and on through the current vintage revival, the classic Italian motor scooter is an enduring design classic from the 20th century.

Scootermania celebrates the superbly simple vehicles that are so symbolic of freedom, style and the modern world. Originating in the 1940s in Milan and Pontedera, Tuscany, the scooter became an enduring transport choice for young people and urban environments.

Early chapters look at scooter racing and long-distance attempts, and their role as an anti-tank weapon in the French army. There is engaging coverage of place of scooters in popular culture from films, music and fashion including the way that a host of disparate groups has made the bikes their own - from the British Mods of the 1960s and 1980s to their role in American and Japanese fashion and in their Italian homeland.

The evolution and design of classic models as the Vespa 150 GS and the Lambretta Li 150 Series 3 are covered while scooter stars such as Enrico Piaggio and Georges Monneret are celebrated in their own words. The book also includes a number of specially photographed features on modern scooter designers, collectors and artists.

Book Reviews - Scootermania: A celebration of style and speed by Josh Sims

» Have you read this book? We'd like to know what you think about it - write a review about Scootermania: A celebration of style and speed book by Josh Sims and you'll earn 50c in Boomerang Bucks loyalty dollars (you must be a Boomerang Books Account Holder - it's free to sign up and there are great benefits!)


A Preview for this title is currently not available.
More Books By Josh Sims
View All