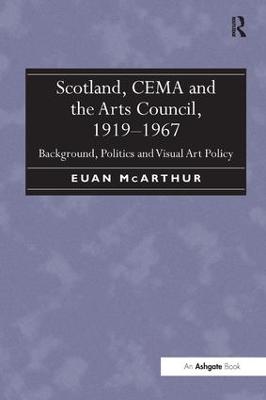 Description - Scotland, CEMA and the Arts Council, 1919-1967 by Euan McArthur

A case study of the relationship between arts and cultural policy and nationalism, Scotland, CEMA and the Arts Council, 1919-1967: Background, Politics and Visual Art Policy examines the overlooked significance of Scotland in the development of British arts policy and institutions. This study is broadly relevant in an era of political devolution, which continues to pose questions for the constituent nations of Britain and their sense of self- and collective identities. Euan McArthur provides a clear account of the background to and evolution of the Council for the Encouragement of Music and the Arts (CEMA) and the Arts Council of Great Britain (ACGB) in Scotland up to the formation of the Scottish Arts Council (SAC) in 1967. He also presents a study of Scottish visual art policy and activities between 1940 and 1967, assessing the successes and failures of visual art policy in Scotland, including the degree to which it evolved differently from England. This development, leading to the re-naming of the Scottish Committee of the ACGB as the SAC, prepared the way for the expansion of activities that marked the 1970s and after. Based on extensive archival research, this book brings to light previously unavailable material, not covered in existing accounts of CEMA/ACGB.

Other Editions - Scotland, CEMA and the Arts Council, 1919-1967 by Euan McArthur » Have you read this book? We'd like to know what you think about it - write a review about Scotland, CEMA and the Arts Council, 1919-1967 book by Euan McArthur and you'll earn 50c in Boomerang Bucks loyalty dollars (you must be a Boomerang Books Account Holder - it's free to sign up and there are great benefits!)

Euan McArthur is Senior Lecturer in Critical and Contextual Studies, Art and Media, Duncan of Jordanstone College of Art and Design, University of Dundee, UK.