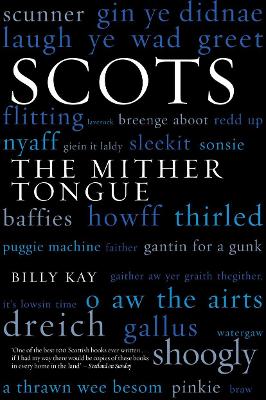 SCOTS- THE MITHER TONGUE is a classic of contemporary Scottish culture and essential reading for those who care about their country's identity in the twenty-first century.

It is a passionately written history of how the Scots have come to speak the way they do and it acted as a catalyst for radical changes in attitude towards the language. Since it was first published in 1986, it has sold 20,000 copies -testimony to the power of its argument and the style, humour and smeddum of its writing. In this completely revised edition, Kay vigorously renews the social, cultural and political debate on Scotland's linguistic future, and argues convincingly for the necessity to retain and extend Scots if the nation is to hold on to the values that have made them what they are as a people. As ever, Kay places Scots in an international context, comparing and contrasting it with other European lesser-used languages, while at home questioning the Scottish Executive's desire to pay anything more than lip service to this crucial part of our national identity. Language is central to people's existence and this vivid account celebrates the survival of Scots in its various dialects, its literature and song -a national treasure that thrives in many parts of the country and underpins the speech of everyone that calls themselves a Scot.

» Have you read this book? We'd like to know what you think about it - write a review about Scots book by Billy Kay and you'll earn 50c in Boomerang Bucks loyalty dollars (you must be a Boomerang Books Account Holder - it's free to sign up and there are great benefits!)

Billy Kay was born in Galston, Ayrshire, in 1951 and was educated at Kilmarnock Academy and Edinburgh University. Much of his work has been devoted to creating an awareness of Scottish culture. A writer and presenter for both radio and television, he is also the co-author of Knee Deep in Claret- A Celebration of Wine and Scotland, while his new book The Scottish World details the remarkable contribution the Scots have made to the modern world. He lives in Fife.

A Preview for this title is currently not available.
More Books By Billy Kay
View All