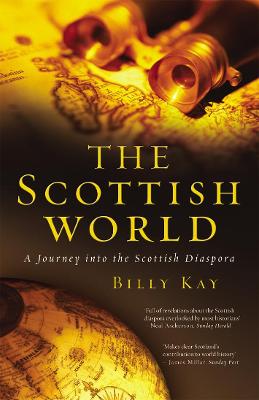 A Journey Into the Scottish Diaspora

A celebration of Scottish achievement in a global context

In The Scottish World, renowned broadcaster Billy Kay takes us on a global journey of discovery, highlighting the extraordinary influence the Scots have had on communities and cultures on almost every continent.

While others have questioned the self-confidence of the Scots, Kay has travelled the world from Bangkok to Brazil, Warsaw to Waikiki and found ringing endorsements for the integrity and intellect, the poetry and passion of the Scottish people in every country he has visited.

He expands people's view of Scotland by relating remarkable stories of the wealthy Scottish merchant community in Gdansk; of national geniuses of Scots descent, such as Lermontov in Russia and Grieg in Norway; of an American Civil War blamed on Sir Walter Scott and initiated in the St Andrew's Society of Charleston; of inspirational missionaries in Calabar and Budapest; of Scotch professors establishing football in soccer strongholds such as Barcelona and S o Paulo; of pioneers like Sandeman and Cockburn, and the Scottish roots of many of the great wines of Europe; and of their amazing involvement in liberation movements in Malawi, Chile, Peru, Greece, Corsica and India.

The Scottish World is a celebration of the enormous contribution the Scots have made to the modern world.

» Have you read this book? We'd like to know what you think about it - write a review about Scottish World book by Billy Kay and you'll earn 50c in Boomerang Bucks loyalty dollars (you must be a Boomerang Books Account Holder - it's free to sign up and there are great benefits!)

Billy Kay was born in Galston, Ayrshire, in 1951 and studied at Edinburgh University. A writer and presenter for both radio and television, he is also the author of the widely acclaimed Scots- The Mither Tongue.

A Preview for this title is currently not available.
More Books By Billy Kay
View All