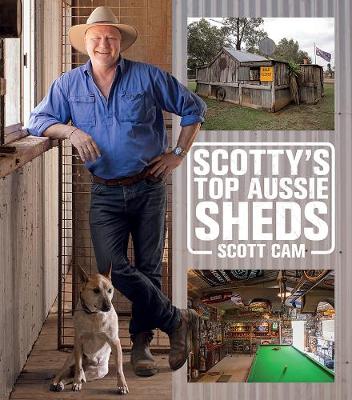 Scott Cam loves his shed-so much so that he has two of them. He loves spending time in his sheds, sometimes doing absolutely zip. Just having a beer, looking around, turning random things on and off, sanding a bit of timber for no reason. And it got him to thinking.

There are thousands of people around with a love of sheds like me, and plenty of their sheds are better than mine. So why not run a competition to find the 20 best ones, and whack 'em in a book for all to see? Celebrate the Great Aussie Shed.

After his nationwide search, here in Scotty's Top Aussie Sheds you'll find the most fascinating examples of our humble, and not so humble, backyard icon. You'll be inspired by the owners' fascinating stories, and by the stunning images of their pride and joy-and you might even join Scotty on his mission: to make sheds great, make them essential, and make them loved again.

» Have you read this book? We'd like to know what you think about it - write a review about Scotty'S Top Aussie Sheds book by Scott Cam and you'll earn 50c in Boomerang Bucks loyalty dollars (you must be a Boomerang Books Account Holder - it's free to sign up and there are great benefits!)

Scott Cam is one of Australia's most popular media personalities. After completing a carpentry apprenticeship, he travelled and worked around Australia for several years before settling in Sydney in 1990 and starting his building company. In 1999, while having a beer in his local pub, he was approached to do a screen test for Channel Nine's Backyard Blitz and subsequently became the show's resident builder/carpenter, launching his TV career. Scott became the host of the hit reality TV show The Block in 2010, and his laidback larrikin attitude has won him millions of fans across Australia, as evidenced by his 2014 Gold Logie award. Scott has published two successful books on building and home renovations with Murdoch Books: Home Maintenance for Knuckleheads (2003) and Out the Back (2004).