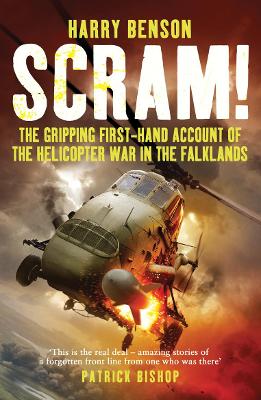 April 2nd 2012 marks the 30th anniversary of the invasion of the Falkland Islands. This is the thrilling untold story of the young helicopter pilots - most barely out of their teens - who risked their lives during this brief but ferocious war.

In April 1982 Harry Benson was a 21-year-old Royal Navy commando helicopter pilot, fresh out of training and one of the youngest helicopter pilots to serve in the Falklands War. These pilots, nicknamed 'junglies', flew most of the land-based missions in the Falklands in their Sea King and Wessex helicopters. Much of what happened in the war - the politics, task force ships, Sea Harriers, landings, Paras and Marines - is well-known and documented. But almost nothing is known of the young commando helicopter pilots and aircrewmen who made it all happen on land and sea. This is their 'Boys Own' story, told for the very first time.

Harry Benson has interviewed forty of his former colleagues for the book creating a tale of skill, initiative, resourcefulness, humour, luck, and adventure. This is a fast-paced, meticulously researched and compelling account written by someone who was there, in the cockpit of a Wessex helicopter.

If you liked Apache, Vulcan 607 and Chickenhawk, you'll love Scram!

The word "Scram" was used to warn other junglies to go to ground or risk being shot down by their own side as Argentinean jets blasted through 'bomb alley'.

Other Editions - Scram! by Harry Benson » Have you read this book? We'd like to know what you think about it - write a review about Scram! book by Harry Benson and you'll earn 50c in Boomerang Bucks loyalty dollars (you must be a Boomerang Books Account Holder - it's free to sign up and there are great benefits!)

Aged 21, Harry was one of the youngest helicopter pilots to serve in the Falklands war. Following two tours as a Royal Navy pilot, Harry moved to Asia in 1988 with his wife Kate to work in finance. He returned to the UK in 1997 took a 1st class degree in Psychology from Bristol University and started what has become Britain's most successful local relationship project, Bristol Community Family Trust, teaching practical relationship skills to thousands of couples.

A Preview for this title is currently not available.
More Books By Harry Benson
View All