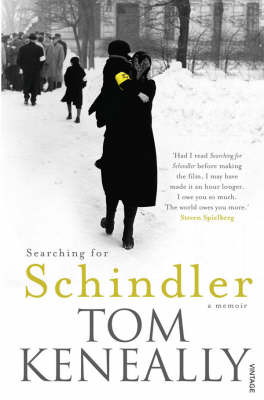 A memoir of Tom's journey around the world to discover the complete story of Oskar Schindler and that list.

A memoir of Tom's journey around the world to discover the complete story of Oskar Schindler and that list.

In 1980 Tom Keneally was in Beverley Hills returning from the Sorrento film festival where The Chant of Jimmy Blacksmith had been showing. Looking for a new briefcase, Tom meets the Polish-Jewish Leopold Pfefferberg Page aka Poldek and his life for the next few years is taken over by this charismatic and driven man and the story he wants shared. "It's a story for you, I swear," he says to Tom.

The story is of course that of 'The all-drinking, all-screwing, all black-marketeering Nazi. But to me he was Jesus Christ, Oskar Schindler". And Poldek shared with Tom the story of Schindler's Ark which went on to win the Booker Prize and ultimately to become the Oscar award-winning film Schindler's List.

Schindler, the ruined Catholic hedonist, had something ambiguous about him that appealled to the ex-seminarian Tom Keneally who still struggled with his own Catholicism and his humanist view of the world. Oskar showed that virtue, regardless of race, creed or religion, emerged where it would. Tom was a small child during WWII and these memories, along with the appeal of Schindler and Poldek's insistence, influenced him to write the book Schindler's Ark .

Oskar and his Jews reduced the Holocaust - an almost untellable story in its scope and devastation - to an understandable human scale. Searching For Schindler is very much Tom's journey, he reflects on his early days as a writer with quite a bit of success - but no confidence - and how this book, the people he met, and the film it became, changed his life.

From his Sydney home, he tracked down the main player's in Poldek and Schindler's story. Tom and Poldek travelled across the US, Germany, Israel, Austria and Poland interviewing survivors and discovering extraordinary stories. Schindler's Ark took a huge toll on Tom, and his family, he had never been so overwhelmed by the writing of a story. It forced him to think about Australians and their attitudes to the Holocaust, to think about the Israel / Palestine situation and about families.

Not ready to give up the story of Schindler and his Jews after the enormous success of the book, Tom is there for the film adaptation and on set for the filming. Filled with stories of Steven Spielberg, Liam Neeson, Ben Kingsley, Ralph Fiennes and many other well-known and strong characters Searching For Schindler gives Tom Keneally scope to show the wonderful, warm, thinking, compassionate and very funny man that he is.

» Have you read this book? We'd like to know what you think about it - write a review about Searching For Schindler book by Tom Keneally and you'll earn 50c in Boomerang Bucks loyalty dollars (you must be a Boomerang Books Account Holder - it's free to sign up and there are great benefits!)

This very readable narrative is Keneally’s tale of how he came to hear of a man named Osckar Schindler, write a book about him and see it turned into a movie. It begins with Poldek, the man whose LA store Keneally steps into to replace a broken briefcase. One of those who attribute their survival of the Holocaust to Schindler, Poldek is larger than life, disarming, and generous with his compliments. It is easy to see how he convinced Keneally to take on Schindler’s story and how his energy pressed the project on. Before the book is even agreed to, Poldek is adamant it will become a film. ‘You’ll win an Oscar for Oskar,’ he would later tell Steven Spielberg—who did, of course. This is neither an in-depth examination of the process of writing the book (Schindler’s Ark is completed by the time we are halfway through), nor of making the film (though we do visit the set), nor is Schindler necessarily at its very heart. Reading it, one feels as if Keneally were in the room telling a series of anecdotes with the polish (and very slight weariness) of someone who has told them many times before: his thoughts on Spielberg, the actors, winning the Booker, meeting the Clintons—and his ever-present knowledge that his book’s success is based on unthinkable horrors. Above all this reads like an affectionate and ultimately poignant thankyou to Poldek, one that seems very well deserved.