The Seasons Of The Soul

Description - The Seasons Of The Soul by Hermann Hesse

Vowing at an early age "to be a poet or nothing at all," Hermann Hesse rebelled against formal education, focusing on a rigorous program of independent study that included literature, philosophy, art, and history. One result of these efforts was a series of novels that became counterculture bibles that remain widely influential today. Another was a body of evocative spiritual poetry. Published for the first time in English, these vivid, probing short works reflect deeply on the challenges of life and provide a spiritual solace that transcends specific denominational hymns, prayers, and rituals.The Seasons of the Soul offers valuable guidance in poetic form for those longing for a more meaningful life, seeking a sense of homecoming in nature, in each stage of life, in a renewed relationship with the divine. Extensive quotations from his prose introduce each theme addressed in the book- love, imagination, nature, the divine, and the passage of time. A foreword by Andrew Harvey reintroduces us to a figure about whom some may have believed everything had already been said. Thoughtful commentary throughout from translator Ludwig Max Fischer helps readers understand the poems within the context of Hesse's life.

Buy The Seasons Of The Soul by Hermann Hesse from Australia's Online Independent Bookstore, Boomerang Books.

Other Editions - The Seasons Of The Soul by Hermann Hesse 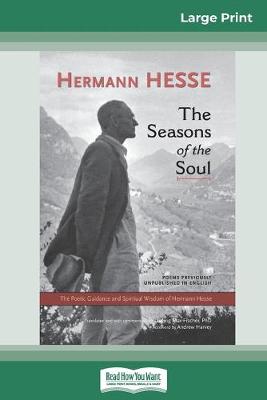 Book Reviews - The Seasons Of The Soul by Hermann Hesse

» Have you read this book? We'd like to know what you think about it - write a review about Seasons Of The Soul book by Hermann Hesse and you'll earn 50c in Boomerang Bucks loyalty dollars (you must be a Boomerang Books Account Holder - it's free to sign up and there are great benefits!)


A Preview for this title is currently not available.
More Books By Hermann Hesse
View All

The Seasons of Life: A Companion for the Poetic Journey - Poems and Prose Previously Unpublished in English
$37.85 $42.06