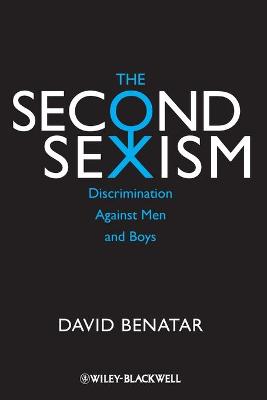 Discrimination Against Men and Boys

Does sexism against men exist? What it looks like and why we need to take it seriously
This book draws attention to the "second sexism," where it exists, how it works and what it looks like, and responds to those who would deny that it exists. Challenging conventional ways of thinking, it examines controversial issues such as sex-based affirmative action, gender roles, and charges of anti-feminism. The book offers an academically rigorous argument in an accessible style, including the careful use of empirical data, and includes examples and engages in a discussion of how sex discrimination against men and boys also undermines the cause for female equality.

» Have you read this book? We'd like to know what you think about it - write a review about Second Sexism book by David Benatar and you'll earn 50c in Boomerang Bucks loyalty dollars (you must be a Boomerang Books Account Holder - it's free to sign up and there are great benefits!)

David Benatar is Professor of Philosophy at the University of Cape Town. He is the author of Better Never to Have Been: The Harm of Coming into Existence (2006).

A Preview for this title is currently not available.
More Books By David Benatar
View All