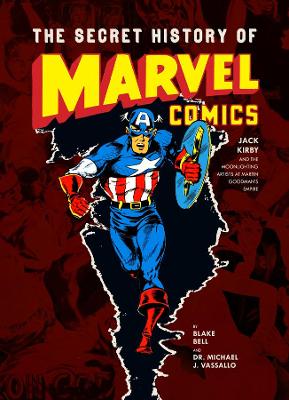 The Secret History Of Marvel Comics

Jack Kirby and the Moonlighting Artists at Martin Goodman's Empire

Description - The Secret History Of Marvel Comics by Blake Bell

Marvel Comics is home to such legendary super-heroes as Spider-Man, Hulk, Thor, Captain America, and Iron Man, all of whom have spun box office gold in the 21st century. But Marvel Comics has a secret history hidden in the shadows of these well-known franchises.
The Secret History of Marvel Comics digs back to the 1930s when Marvel Comics wasn't just a comic-book producing company. Marvel Comics owner Martin Goodman had tentacles into a publishing world that might have made that era's conservative American parents lynch him on his front porch. Marvel was but a small part of Goodman's publishing empire, which had begun years before he published his first comic book. Goodman mostly published lurid and sensationalistic story books (known as "pulps") and magazines, featuring sexually-charged detective and romance short fiction, and celebrity gossip scandal sheets. And artists like Jack Kirby, who was producing Captain America for eight-year-olds, were simultaneously dipping their toes in both ponds.
The Secret History of Marvel Comics tells this parallel story of 1930s/40s Marvel Comics sharing offices with those Goodman publications not quite fit for children. The book also features a comprehensive display of the artwork produced for Goodman's other enterprises by Marvel Comics artists such as Jack Kirby and Joe Simon, Alex Schomburg, Bill Everett, Al Jaffee, and Dan DeCarlo, plus the very best pulp artists in the field, including Norman Saunders, John Walter Scott, Hans Wesso, L.F. Bjorklund, and Marvel Comics #1 cover artist Frank R. Paul. Goodman's magazines also featured cover stories on celebrities such as Jackie Gleason, Elizabeth Taylor, Liberace, and Sophia Loren, as well as contributions from famous literary and social figures such as Isaac Asimov, Theodore Sturgeon, and L. Ron Hubbard.
These rare pieces of comic art, pulp and magazine history will open the door to Marvel Comics' unseen history.

» Have you read this book? We'd like to know what you think about it - write a review about Secret History Of Marvel Comics book by Blake Bell and you'll earn 50c in Boomerang Bucks loyalty dollars (you must be a Boomerang Books Account Holder - it's free to sign up and there are great benefits!)


A Preview for this title is currently not available.
More Books By Blake Bell
View All