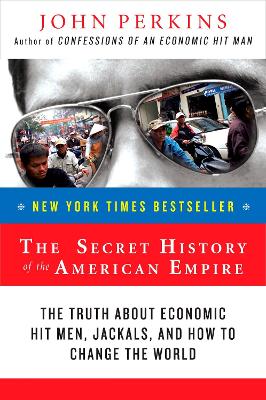 Secret History of the American Empire

Description - Secret History of the American Empire by John Perkins

From the author of the phenomenal New York Times bestseller, Confessions of an Economic Hit Man, comes an expose of international corruption, and an inspired plan to turn the tide for future generations

With a presidential election around the corner, questions of America's military buildup, environmental impact, and foreign policy are on everyone's mind. Former Economic Hit Man John Perkins goes behind the scenes of the current geopolitical crisis and offers bold solutions to our most pressing problems. Drawing on interviews with other EHMs, jackals, CIA operatives, reporters, businessmen, and activists, Perkins reveals the secret history of events that have created the current American Empire, including:


* How the defeats in Vietnam and Iraq have benefited big business
* The role of Israel as Fortress America in the Middle East
* Tragic repercussions of the IMF's Asian Economic Collapse
* The current Latin American revolution and its lessons for democracy
* U.S. blunders in Tibet, Congo, Lebanon, and Venezuela

From the U.S. military in Iraq to infrastructure development in Indonesia, from Peace Corps volunteers in Africa to jackals in Venezuela, Perkins exposes a conspiracy of corruption that has fueled instability and anti-Americanism around the globe, with consequences reflected in our daily headlines. Having raised the alarm, Perkins passionately addresses how Americans can work to create a more peaceful and stable world for future generations.


Other Editions - Secret History of the American Empire by John Perkins

» Have you read this book? We'd like to know what you think about it - write a review about Secret History of the American Empire book by John Perkins and you'll earn 50c in Boomerang Bucks loyalty dollars (you must be a Boomerang Books Account Holder - it's free to sign up and there are great benefits!)

John Perkins is the bestselling author of the classic expose Confessions of an Economic Hit Man. He is the founder and president of the Dream Change Coalition, which works closely with Amazonian and other indigenous people to help preserve their environments and cultures. From 1971 to 1981 he worked for the international consulting firm of Chas.T. Main, where he became chief economist and director of economics and regional planning. Perkins has lectured and taught at universities and learning centers on four continents and is a regular lecturer for the Omega Center.

A Preview for this title is currently not available.
More Books By John Perkins
View All

Every Woman Her Own House-Keeper; Or, the Ladies' Library: Containing the Cheapest and Most Extensive System of Cookery Ever Offered to the Public. ... Also, the Family Physician; Or, a Complete Body of Domestic Medicine
$141.17 $156.86

A Profitable Book, Treating of the Laws of England: Principally as They Relate to Conveyancing.
$75.38 $83.76

Thoughts on Agency: Wherein, the Article of Motive (as Necessitating Human Action) Is Particularly Examined ...
$33.21 $36.90

Theory of Agency, Or, an Essay on the Nature, Source and Extent of Moral Freedom: In Two Parts, with Occasional Observations and Reflections.
$33.21 $36.90