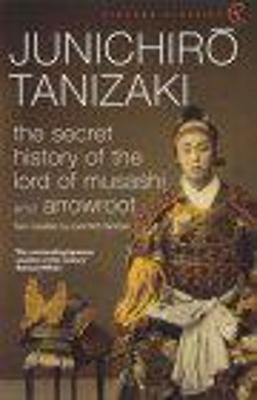 The Secret History Of The Lord Of Musashi

These two short novels, published in the early 1930's ranked high in Tanizaki's own estimation of his work. The contrast is stark, but in their controlled complexities of tone, both bear the unmistakable stamp of Tanizaki's hand. MUSASHI deals with the dark sexual obsessions of a sixteenth-century warlord, accidentally initiated in his youth into the morbid rites attendant upon battle. ARROWROOT too touches on the pursuit of legend, but in a totally different mode. Cast in the uniquely Japanese form of the 'essay novel', the narrative blends the stories of two friends on an expedition into the mountains south of Kyoto, one of them haunting the traces of a medieval myth, the other in search of a more recent and more private past.

Buy The Secret History Of The Lord Of Musashi by Junichiro Tanizaki from Australia's Online Independent Bookstore, Boomerang Books.

» Have you read this book? We'd like to know what you think about it - write a review about Secret History Of The Lord Of Musashi book by Junichiro Tanizaki and you'll earn 50c in Boomerang Bucks loyalty dollars (you must be a Boomerang Books Account Holder - it's free to sign up and there are great benefits!)

Junichiro Tanizaki was born in 1886 in Tokyo, where his family owned a printing establishment. He studied Japanese literature at Tokyo Imperial University, and his first published work, a one-act play, appeared in 1910 in a literary magazine he helped to found.Tanizaki lived in the cosmopolitan Tokyo area until the earthquake of 1923, when he moved to the gentler and more cultivated Kyoto-Osaka region, the scene of The Makioka Sisters. There he became absorbed in the Japanese past and abandoned his superficial Westernisation. All his most important works were written after 1923, among them Naomi (1924), Some Prefer Nettles (1929), Arrowroot (1931), Ashikari (1932), A Portrait of Shunkin (1932), The Secret History of the Lord of Musashi (1935), several modern versions of The Tale of Genji (1941, 1954 and 1965), The Makioka Sisters, Captain Shigemoto's Mother (1949), The Key (1956) and Diary of a Mad Old Man(1961). By 1930 he had gained such renown that an edition of his complete works was published, and he was awarded an Imperial Award for Cultural Merit in 1949. In 1965 he was elected an honorary m

A Preview for this title is currently not available.
More Books By Junichiro Tanizaki
View All