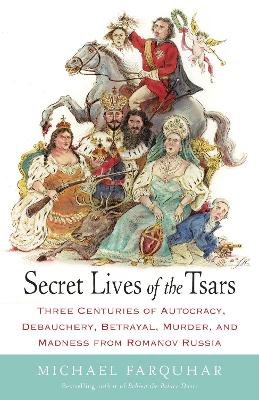 Secret Lives Of The Tsars

Description - Secret Lives Of The Tsars by Michael Farquhar

Scandal! Intrigue! Cossacks! Here the world's most engaging royal historian chronicles the world's most fascinating imperial dynasty: the Romanovs, whose three-hundred-year reign was remarkable for its shocking violence, spectacular excess, and unimaginable venality. In this incredibly entertaining history, Michael Farquhar collects the best, most captivating true tales of Romanov iniquity. We meet Catherine the Great, with her endless parade of virile young lovers (none of them of the equine variety); her unhinged son, Paul I, who ordered the bones of one of his mother's paramours dug out of its grave and tossed into a gorge; and Grigori Rasputin, the "Mad Monk," whose mesmeric domination of the last of the Romanov tsars helped lead to the monarchy's undoing. From Peter the Great's penchant for personally beheading his recalcitrant subjects (he kept the severed head of one of his mistresses pickled in alcohol) to Nicholas and Alexandra's brutal demise at the hands of the Bolsheviks, Secret Lives of the Tsars captures all the splendor and infamy that was Imperial Russia.

Praise for Secret Lives of the Tsars

"An accessible, exciting narrative . . . Highly recommended for generalists interested in Russian history and those who enjoy the seamier side of past lives."--Library Journal (starred review)

"An excellent condensed version of Russian history . . . a fine tale of history and scandal . . . sure to please general readers and monarchy buffs alike."--Publishers Weekly

"Readers of this book may get a sense of why Russians are so tolerant of tyrants like Stalin and Putin. Given their history, it probably seems normal."--The Washington Post


Book Reviews - Secret Lives Of The Tsars by Michael Farquhar

» Have you read this book? We'd like to know what you think about it - write a review about Secret Lives Of The Tsars book by Michael Farquhar and you'll earn 50c in Boomerang Bucks loyalty dollars (you must be a Boomerang Books Account Holder - it's free to sign up and there are great benefits!)

Michael Farquhar, a former writer and editor at The Washington Post, is the bestselling author of the critically praised Behind the Palace Doors, as well as the national bestsellers A Treasury of Royal Scandals, A Treasury of Great American Scandals, A Treasury of Deception, and A Treasury of Foolishly Forgotten Americans. His work has been featured in a number of national publications, and he has appeared as a commentator on such programs as History's top-rated Russia: Land of the Tsars and The French Revolution.

A Preview for this title is currently not available.
More Books By Michael Farquhar
View All