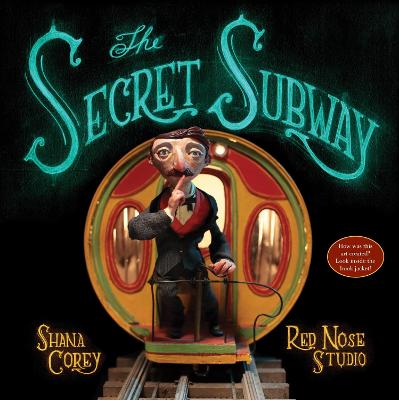 New York City in the 1860s was a mess- crowded, disgusting, filled with garbage. You see, way back in 1860, there were no subways, just cobblestone streets. That is, until Alfred Ely Beach had the idea for a fan-powered train that would travel underground. On February 26, 1870, after fifty-eight days of drilling and painting and plastering, Beach unveiled his masterpiece-and throngs of visitors took turns swooshing down the track.

The Secret Subway will wow readers, just as Beach's underground train wowed riders over a century ago.

» Have you read this book? We'd like to know what you think about it - write a review about Secret Subway book by Shana Corey and you'll earn 50c in Boomerang Bucks loyalty dollars (you must be a Boomerang Books Account Holder - it's free to sign up and there are great benefits!)

Shana Corey has written several picture books, among them Here Come the Girl Scouts!, a New York Times Editors' Choice, and You Forgot Your Skirt, Amelia Bloomer, which the New York Times called oa picture book girls are likely to love.o She has always been intrigued by New York City history, so when she came across a passing mention of Alfred Ely Beach's underground train, she wanted to know more. It wasn't long before she was skulking around Warren and Murray Streets, looking for the site of Devlin's department store, and seeking out Boss Tweed's grave in Greenwood Cemetery. Learn more at shanacorey.com. Red Nose Studio created the art for Here Comes the Garbage Barge! by Jonah Winter, which was selected as a New York Times Best Illustrated Book, a School Library Journal Best Book, and a Huffington Post Best Picture Book of the Year and received four starred reviews, as well as The Beginner's Guide to Running Away from Home by Jennifer LaRue Huget, praised by the Wall Street Journal for its ovivid and arresting illustrations.o Visit him at rednosestudio.com.

A Preview for this title is currently not available.
More Books By Shana Corey
View All