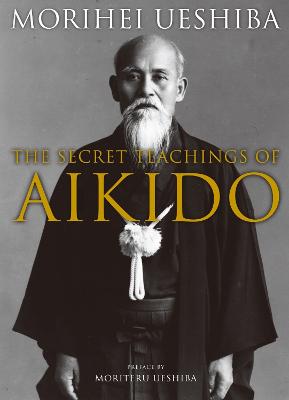 The Secret Teachings Of Aikido

Description - The Secret Teachings Of Aikido by Morihei Ueshiba

Aikido evolved from the rich martial traditions of Japan, and was developed by Morihei Ueshiba based on their profound philosophies. In this book, the author explains how Aikido is both the spirit of love and the study of that spirit. In unique and incisive language, Ueshiba discusses the arcane aspects of Aikido's aims and techniques, as well as the central importance of breathing, ki (chi), and Aikido's relationship to the spirit and body - these form the very essence of Aikido.

He goes on to consider the virtues of this revered martial art, urging the reader to link to the universe through Aikido, and ultimately to unify the divine and human. He also explains the essence of Takemusu aiki (valorous force of procreation and harmony), and Misogi (the ritual of purifying oneself).

The book includes many rare photos of the author - on both his techniques and his everyday life. Also included are his twenty-five doka (spiritual Japanese-style poems) in Japanese, English, and Romanization. The introduction was written by his grandson, Moriteru Ueshiba, the present Aikido Doshu.

Book Reviews - The Secret Teachings Of Aikido by Morihei Ueshiba

» Have you read this book? We'd like to know what you think about it - write a review about Secret Teachings Of Aikido book by Morihei Ueshiba and you'll earn 50c in Boomerang Bucks loyalty dollars (you must be a Boomerang Books Account Holder - it's free to sign up and there are great benefits!)

MORIHEI UESHIBA was born in Western Japan in 1883. After mastering the classical styles of judo, kendo and jujutsu, he created Aikido, an entirely original martial art, based on the spiritual teachings of the 'moto-kyo' religions. Following the Second World War Ueshiba established the Aikikai Foundation in Tokyo to promote the dissemination of Aikido throughout the world. He died in 1969.

A Preview for this title is currently not available.
More Books By Morihei Ueshiba
View All