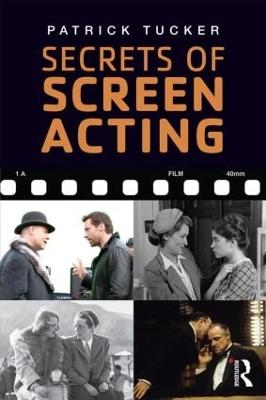 When it was first published in 1993, Secrets of Screen Acting broke new ground in explaining how acting for the camera is different from acting on stage. Reaction time is altered, physical timing and placement are reconceived, and the proportions of the digital frame itself become the measure of all things, so the director must conceptualize each image in terms of this new rectangle and actors must 'fit' into the frame. Based on a revolutionary non-Method approach to acting, this book shows what actually works: how an actor, an announcer--anyone working in front of the cameras--gives excellent performances on screen.

Instead of starting with what is real and trying to wrestle that onto the screen, Patrick Tucker explains how to work with the realities of a shoot and work from there towards the real. His step-by-step guide to the elements of effective screen acting is an extension and explanation of a lifetime of work in the field, containing over 50 acting exercises and the tried-and-tested Screen Acting Checklist.

As well as being completely updated to cover new techniques, film references and insights, this third edition now includes a set of Film Clip Time Codes for each film. These not only itemise the films discussed in each chapter, but also pinpoint the precise moments where each example can be found so that students, teachers, and professional actors can refer to them quickly and easily.

» Have you read this book? We'd like to know what you think about it - write a review about Secrets of Screen Acting book by Patrick Tucker and you'll earn 50c in Boomerang Bucks loyalty dollars (you must be a Boomerang Books Account Holder - it's free to sign up and there are great benefits!)

Patrick Tucker is an accomplished director of the screen and stage. Since his first professional production in 1968, he has directed more than 200 plays in all forms of theater, from weekly repertory to the Royal Shakespeare Company. He was accepted by the BBC Television Directing program in 1976 and has subsequently directed more than 150 television dramas. He has developed his unique approach to television and film acting as a separate discipline, and he has lectured and taught all over the world.

A Preview for this title is currently not available.
More Books By Patrick Tucker
View All