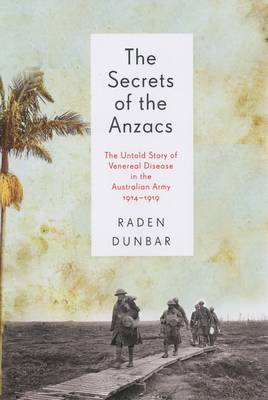 The Secrets Of The Anzacs: The Untold Story Of Venereal DiseaseIn The Australian Army, 1914-1919

Description - The Secrets Of The Anzacs: The Untold Story Of Venereal DiseaseIn The Australian Army, 1914-1919 by Raden Dunbar

Here is a truly astonishing statistic- during World War I, about 60,000 soldiers in the Australian Imperial Force were treated by army doctors in Egypt, Europe, and Australia for venereal diseases - almost the same number of diggers who were killed during the war. This silent, secret scourge took hold in Cairo in 1914, and continued until 1919 when survivors of the war waited in Europe to be repatriated. Nobody wanted to know about it, at first - and the general public back home was, of course, kept in the dark. Moralistic commanders in Egypt ordered strict punishments for men with VD, and the young victims were sent back to Australia in disgrace, most of them inventing amazing excuses for their inexplicable return. Many of them re-enlisted, but some felt they had to change their names to do so. Medical officers couldn't afford to be puritanical, though. They tried to prevent the diseases, as well to cure them with toxic drugs in army VD hospitals in Cairo, England, and at Langwarrin near Melbourne. Eventually, even the army had to face facts, and, after the AIF arrived in Europe in 1916, commanders ordered that huge quantities of prophylactics be distributed, and that safe-sex education be given as well. The Secrets of the Anzacs reveals all these secrets, and more. But perhaps the most remarkable revelation it contains is that many of the re-enlisted men went on to perform deeds of battlefield bravery - even, in one case, to the extent of being awarded a Victoria Cross under a false name. This fascinating book also contains numerous original photographs, artworks, and documents, most of which have never been published before. 'Going against the grain of an iconic narrative that reduces human beings to convenient national archetypes, Raden Dunbar gives us real men fighting a real war - not only against a military enemy, but also against the self-inflicted comforts of the flesh. The Secrets of the Anzacs is a full-frontal assault on our senses and our historical sensibilities. Deeply researched and always fascinating, Dunbar helps restore the Anzac legend to something more tangible, more complex, and, oddly, more heroic.' Clare Wright author of The Forgotten Rebels of Eureka 'Written with such candour and realism, you might want to wash your hands afterwards.' Peter Stanley author of Lost Boys of Anzac and Bad Characters 'Within the army, venereal diseases weakened the force and drained medical resources. But venereal disease was also a human problem, where one act of recklessness could ruin a man's life. Raden Dunbar tells the story of the generals, the doctors, and the victims with clarity and compassion. A timely and necessary contribution to the centenary of Anzac.' Janet McCalman author of Sex and Suffering

Buy The Secrets Of The Anzacs: The Untold Story Of Venereal DiseaseIn The Australian Army, 1914-1919 by Raden Dunbar from Australia's Online Independent Bookstore, Boomerang Books.

Book Reviews - The Secrets Of The Anzacs: The Untold Story Of Venereal DiseaseIn The Australian Army, 1914-1919 by Raden Dunbar

» Have you read this book? We'd like to know what you think about it - write a review about Secrets Of The Anzacs: The Untold Story Of Venereal DiseaseIn The Australian Army, 1914-1919 book by Raden Dunbar and you'll earn 50c in Boomerang Bucks loyalty dollars (you must be a Boomerang Books Account Holder - it's free to sign up and there are great benefits!)

A Preview for this title is currently not available.
More Books By Raden Dunbar
View All