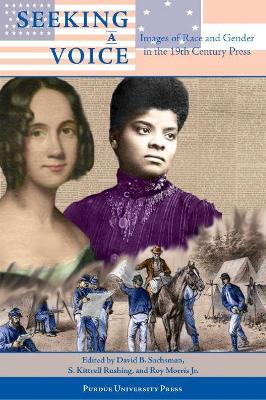 Images of Race and Gender in the 19th Century Press

Description - Seeking a Voice by David B. Sachsman

This volume chronicles the media's role in reshaping American life during the tumultuous nineteenth century by focusing specifically on the presentation of race and gender in the newspapers and magazines of the time. The work is divided into four parts: Part I, 'Race Reporting', details the various ways in which America's racial minorities were portrayed; Part II, 'Fires of Discontent', looks at the moral and religious opposition to slavery by the abolitionist movement and demonstrates how that opposition was echoed by African Americans themselves; Part III, 'The Cult of True Womanhood', examines the often disparate ways in which American women were portrayed in the national media as they assumed a greater role in public and private life; and Part IV, 'Transcending the Boundaries', traces the lives of pioneering women journalists who sought to alter and expand their gender's participation in American life, showing how the changing role of women led to various journalistic attempts to depict and define women through sensationalistic news coverage of female crime stories.

Other Editions - Seeking a Voice by David B. Sachsman Book Reviews - Seeking a Voice by David B. Sachsman

» Have you read this book? We'd like to know what you think about it - write a review about Seeking a Voice book by David B. Sachsman and you'll earn 50c in Boomerang Bucks loyalty dollars (you must be a Boomerang Books Account Holder - it's free to sign up and there are great benefits!)

David B. Sachsman holds the George R. West, Jr. Chair of Excellence in Communication and Public Affairs at the University of Tennessee-Chattanooga. Sachsman is an editor of The Civil War and the Press (2000) and director of the annual Symposium on the 19th Century Press, the Civil War, and Free Expression, which he and Kit Rushing founded in 1993. He also is known for his books and articles on environmental communication. S. Kittrell Rushing is the Frank McDonald Professor of Communication and the head of the Communication Department at the University of Tennessee-Chattanooga. His current research interests include newspapers of the antebellum and Civil War eras. He edited and wrote the introduction to A Family Secret (2005), the first novel of journalist and educator Eliza Frances ""Fanny"" Andrews.

A Preview for this title is currently not available.
More Books By David B. Sachsman
View All