This volume, originally published in 1958, contains a selection of the most important and interesting articles by Knut Wicksell, which had hitherto only been published in Swedish. They cover Wicksell's views on Economics and monetary theory, his theory of production and distribution, some review articles on the works of Pareto, Boehm-Bawerk, Carl Menger and Bowley and some papers on foreign trade problems, written after the First World War.

Erik Lindahl's introductory essay gives a picture of Wicksell the social reformer, who radical opinions often brought him into conflict with the authorities and the general public.

Other Editions - Selected Papers on Economic Theory by Knut Wicksell 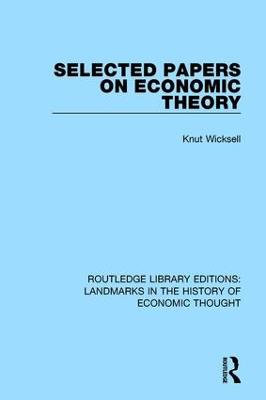 » Have you read this book? We'd like to know what you think about it - write a review about Selected Papers on Economic Theory book by Knut Wicksell and you'll earn 50c in Boomerang Bucks loyalty dollars (you must be a Boomerang Books Account Holder - it's free to sign up and there are great benefits!)