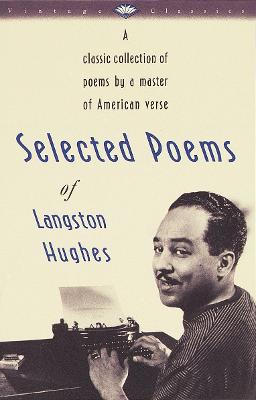 From the publication of his first book of poems, The Weary Blues, in 1926, Langston Hughes electrified readers and launched a renaissance in black writing in America.

The poems Hughes wrote celebrated the experience of invisible men and women: of slaves who "rushed the boots of Washington"; of musicians on Lenox Avenue; of the poor and the lovesick; of losers in "the raffle of night." They conveyed that experience in a voice that blended the spoken with the sung, that turned poetic lines into the phrases of jazz and blues, and that ripped through the curtain separating high from popular culture. They spanned the range from the lyric to the polemic, ringing out "wonder and pain and terror--and the marrow of the bone of life."

The poems in this collection were chosen by Hughes himself shortly before his death in 1967 and represent work from his entire career, including "The Negro Speaks of Rivers," "The Weary Blues," "Still Here," "Song for a Dark Girl," "Montage of a Dream Deferred," and "Refugee in America." It gives us a poet of extraordinary range, directness, and stylistic virtuosity.

"Langston Hughes is a titanic figure in 20th-century American literature . . . a powerful interpreter of the American experience." --The Philadelphia Inquirer

» Have you read this book? We'd like to know what you think about it - write a review about Selected Poems Of Langston Hughes book by Langston Hughes and you'll earn 50c in Boomerang Bucks loyalty dollars (you must be a Boomerang Books Account Holder - it's free to sign up and there are great benefits!)

Langston Hughes was born in Joplin, Missouri, in 1902. After graduation from high school, he spent a year in Mexico with his father, then a year studying at Columbia University. His first poem in a nationally known magazine was "The Negro Speaks of Rivers," which appeared in Crisis in 1921. In 1925, he was awarded the First Prize for Poetry of the magazine Opportunity, the winning poem being "The Weary Blues," which gave its title to his first book of poems, published in 1926. As a result of his poetry, Mr. Hughes received a scholarship at Lincoln University in Pennsylvania, where he won his B.A. in 1929. In 1943, he was awarded an honorary Litt.D. by his alma mater; he has also been awarded a Guggenheim Fellowship (1935), a Rosenwald Fellowship (1940), and an American Academy of Arts and Letters Grant (1947). From 1926 until his death in 1967, Langston Hughes devoted his time to writing and lecturing. He wrote poetry, short stories, autobiography, song lyrics, essays, humor, and plays. A cross section of his work was published in 1958 as The Langston Hughes Reader.

A Preview for this title is currently not available.
More Books By Langston Hughes
View All