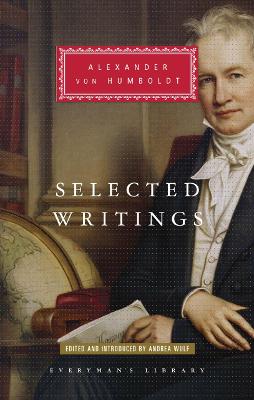 Humboldt (1769-1859) was an intrepid explorer and the most famous scientist of his age. His life was packed with adventure and discovery, whether climbing volcanoes in the Andes, swimming with crocodiles, racing through anthrax-infected Siberia, or publishing groundbreaking bestsellers. Ahead of his time, he recognized nature as an interdependent whole and he saw before anyone else that humankind was on a path to destroy it. He was one of the first European to study the Inca, Aztec and Mayan cultures and his epic five-year expedition to Latin America (1799-1804) prompted him to denounce slavery as 'the greatest evil ever to have afflicted humanity'. To Humboldt, the melody of his prose was as important as its content, and this selection from his most famous works - the Personal Narrative of his travels to Latin America, Cosmos, Views of Nature, Views of the Cordilleras and Monuments of the Indigenous Peoples of the Americas, The Geography of Plants and his anti-slavery essay in Political Essay of the Island of Cuba - allows us the pleasure of reading his own accounts of his daring explorations and new concept of nature. Humboldt's writings profoundly influenced naturalists and poets including Darwin, Thoreau, Muir, Goethe, Wordsworth, and Whitman. The Selected Writings is not only a tribute to Humboldt's important role in environmental history and science, but also to his ability to fashion powerfully poetic narratives out of scientific observations.

» Have you read this book? We'd like to know what you think about it - write a review about Selected Writings book by Alexander von Humboldt and you'll earn 50c in Boomerang Bucks loyalty dollars (you must be a Boomerang Books Account Holder - it's free to sign up and there are great benefits!)


A Preview for this title is currently not available.
More Books By Alexander von Humboldt
View All

Political Essay on the Kingdom of New Spain: Containing Researches Relative to the Geography of Mexico ... the Physical Aspect of the Country, the Population, the State of Agriculture and Manufacturing and Commercial Industry ...... Volume 1 of 2
$72.18 $80.20

The Travels and Researches of Alexander Von Humboldt: Being a Condensed Narrative of His Journeys in the Equinoctial Regions of America, and in Asiatic Russia; Together with Analyses of His More Important Investigations.
$78.80 $87.55

Aspects of Nature, in Different Lands and Different Climates: With Scientific Elucidations. Volume 1 of 2
$65.57 $72.86

Aspects of Nature, in Different Lands and Different Climates: With Scientific Elucidations. Volume 2 of 2
$72.18 $80.20

Personal Narrative of Travels to the Equinoctial Regions of the New Continent During the Years 1799-1804 by Alexander de Humboldt and Aime Bonpland.
$78.80 $87.55

Political Essay on the Kingdom of New Spain: Containing Researches Relative to the Geography of Mexico ... the Physical Aspect of the Country, the Population, the State of Agriculture and Manufacturing and Commercial Industry ...... Volume 2 of 2
$74.38 $82.65