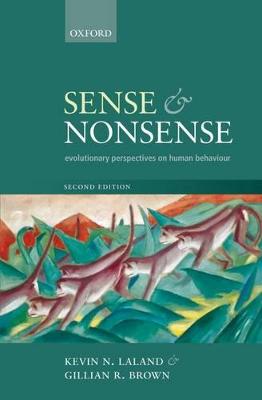 Sense and Nonsense provides an introduction to the ideas, methods and findings of five such schools, namely, sociobiology, human behavioural ecology, evolutionary psychology, cultural evolution, and gene-culture co-evolution. In this revised and updated edition of their successful monograph, Laland and Brown provide a balanced, rigorous analysis that scrutinizes both the evolutionary arguments and the allegations of the critics, carefully guiding the reader
through the mire of confusing terminology, claim and counter-claim, and polemical statements. This readable and informative introductory book will be of use to undergraduate and postgraduate students (for
example, in psychology, anthropology and zoology), to experts on one approach who would like to know more about the other perspectives, and to lay-persons interested in evolutionary explanations of human behaviour. Having completed this book, the reader should feel better placed to assess the legitimacy of claims made about human behaviour under the name of evolution, and to make judgements as to what is sense and what is nonsense.

» Have you read this book? We'd like to know what you think about it - write a review about Sense and Nonsense book by Kevin N. Laland and you'll earn 50c in Boomerang Bucks loyalty dollars (you must be a Boomerang Books Account Holder - it's free to sign up and there are great benefits!)

Kevin N. Laland is Professor of Behavioural and Evolutionary Biology at the University of St Andrews. His research encompasses a range of topics related to animal behaviour and evolution, particularly social learning, gene-culture coevolution, and niche construction. He has published 6 books and over 160 articles on these topics and has been elected a Fellow of the Royal Society of Edinburgh. He is also a former President of the European Human Behaviour and Evolution Association. Gillian R. Brown is a lecturer in the School of Psychology at the University of St Andrews. Her research focuses on sex differences in the behaviour of mammals, which she studies from neuroendocrine, developmental and evolutionary perspectives. She has published over 40 articles on sex differences, covering topics such as adaptive birth sex ratios, sex differences in infant and adolescent behaviour, parental investment and the evolution of mating strategies. She has held a Wellcome Trust Career Development Fellowship.

A Preview for this title is currently not available.
More Books By Kevin N. Laland
View All